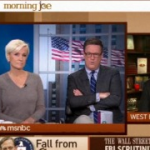 From Mediaite: General David Petraeus’ resignation after an alleged affair has been top news this weekend. Today, Morning Joe weighed in: writes Mediaite, “New York’s Rep. Peter King appeared on Morning Joe Monday, where he took a moment to offer his take on General David Petraeus‘ announcement that he would step down as a result of an affair.. host Joe Scarborough asked King whether he was skeptical that Attorney General Holder kept this information regarding Petraeus from the White House despite the fact that his agency knew about it ‘since last summer.’ ‘I’m not into conspiracy theories,’ said King, but he definitely has questions about who was told about this, and when. ‘It is mindblowing,’ said Scarborough, ‘…Somebody needs to be fired here.'” Read more of what they all had to say here. 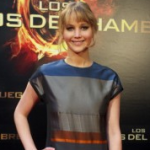 From Gossip Cop: Jennifer Lawrence is one of the most refreshing young actresses in Hollywood. In the latest, she gives yet another entertaining interview, reports Gossip Cop: “The 22-year-old actress, who has compared her mom to Dina Lohan and called herself “obese” by showbiz standards, is characteristically frank in an interview with the New York Times about her upcoming movie, Silver Linings Playbook. Lawrence tells the paper that director David O. Russell asked her to gain weight for her role in the film, in which she stars as young, sex-addicted widow alongside Bradley Cooper. Her response to Russell? ‘I was like, ‘Hell yeah!’’ she says, noting, ‘That never happens in a movie.'” For more of the interview, read the full story here. 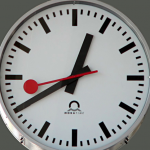 From Geekosystem: It seems Apple just can’t stay away from patent wars. In the latest, they pay $21 million to patent the design of …a clock. Reports Geekosystem, “As some might recall, part of Apple‘s move to iOS 6 included a new clock design. Unfortunately for them, this clock design was suspiciously similar to the one used by Swiss national rail company SBB. They knew it, and SBB knew it. Everyone that even so much as glanced at the two designs knew it. So, like usual, Apple settled with SBB for an undisclosed sum in order to license the design. How much is a clock design worth? Well, when you’re licensing it after the fact, it looks like a clock design is worth around $21 million… Neither company has officially confirmed this figure, but considering the number of times iOS 6 has been downloaded, it’s actually on the low side compared to what the rail company could have made through litigation.” Read more about it here. 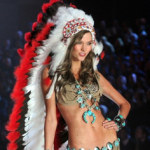 From Styleite: Fashion can be creative, inspiring, ground-breaking, and generation-changing, but it can also be …politically incorrect. Writes Styleite, “Victoria’s Secret received plenty of well-deserved approbation for their role in helping out with Hurricane Sandy relief efforts in the week leading up to their annual fashion show, and this year’s spectacle was every bit the glittery, star-studded bash that we’ve come to expect. But all is not well in lingerie land, after the company sent (white, American model) Karlie Kloss down the runway in a feathered headdress, buckskin bikini, and oodles of turquoise jewelry… Predictably, the outfit… sparked outrage within the Native American community for its misappropriation of cultural attire. The controversy came mere days after No Doubt pulled their video for ‘Looking Hot,’ which featured (white, American singer) Gwen Stefani dressed up in similarly stereotypical garb.” Read more here. 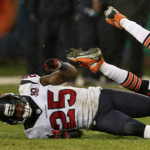 From SportsGrid: Yesterday was Sunday. That means football in America. What happened? SportsGrid catches you up: “The Texans beat the Bears, and it was not pretty. Go figure: when two of the league’s best defensive teams face off in rainy weather not conducive to offense, you get a defensive battle. The Texans topped the Bears 13-6 to move to 8-1, knocking Jay Cutler out of the game while they were at it. While the normally-prolific Texans pass rush didn’t produce any sacks, the defense forced four turnovers (two on Cutler interceptions) and limited the Bears to 249 total yards… In 4 p.m. NFL news: the Rams and 49ers tied, the NFL’s first deadlocked result in four years.” For more, read on here. 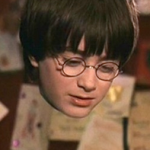 From The Mary Sue: This is BIG news for Harry Potter fans, or superhero fans in general, or really just anyone who wanted to sneak around and/or escape an awkward social situation… writes The Mary Sue, scientists at Duke University have invented an invisibility cloak. They clarify: “OK, first, a caveat: We’re not quite up to Harry Potter-level shenanigans yet.   The “cloak,” created by a team at Duke University led by graduate student Nathan Landry, isn’t a cloak in the swirly-cloth sense, but rather a diamond-shaped box made out of something called metamaterial. It can only shield a 3×0.4″ cylinder from being seen from a specific direction. And the cylinder can only be shielded from microwave radiation, not the visible light spectrum. Still, this is the first time that any invisibility cloak of any description has been successfully brought into the realm of reality. ” Read more here. 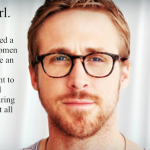 From The Jane Dough: Today is an important holiday: Veteran’s Day. As we take a moment to thank our country’s soldiers, The Jane Dough is also taking a moment to celebrate one (less important and less serious) other holiday: Ryan Gosling’s Birthday. Writes the site’s Laura Donovan, “Listen. I’m overly optimistic about most things. Given that superhero/actor/Godsend Ryan Gosling has actually saved lives before, I still hold out for the day in which I trip on the sidewalk and he catches my fall with one arm. The other hand, of course, will be holding puppies. I know it’s going to happen sooner or later, so I’d like to honor the Canadian on his birthday with some amazing memes from the Feminist Ryan Gosling Tumblr page, which inspired a book because he’s just that incredible. Happy 32nd birthday, Gosling, and by all means, marry me.” See all those memes here. 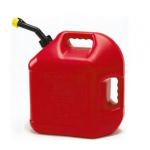 From The Braiser: Well, this isn’t good. Reports The Braiser, “Sure, everyone in New York with a car has been hoarding gas ever since Hurricane Sandy hit, and there have definitely been some unsavory exchanges made for the hot (literally) commodity. But a New York sushi chef’s hoarding activities had some dire consequences, including the act of Lighting Employees On Fire. Fei Teng, who worked at ENO in Manhattan’s East Side, had been hoarding and hiding gasoline in empty soy sauce buckets in the restaurant’s basement. Last Friday night, he asked one of his employees to bring up a bucket to fill his car — but he tripped, spilling half a bucket of gasoline on the kitchen floor, near unsafe things like flames and grills and fire. ‘The gas ignited and a chef nearby was immediately torched,’ the New York Daily News dryly reported.” Read more about what happened here.