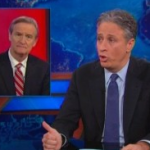 From Mediaite: Hurricane Sandy hit the Northeast hard, and relief efforts are now in full force. Reports Mediaite, “After two days on hiatus due to Hurricane Sandy, Jon Stewart was back on the air tonight to recap just how hard New York was hit by the hurricane in the past few days. Stewart said that Manhattan is still so dark, he’s nicknaming it ‘Little North Korea.’ He credited the state and local officials who were quick to respond to the damage, singling out New Jersey governor Chris Christie for his praise of President Obama while working with him on the devastation.” Read more of what he had to say, and watch the video from the show, here. 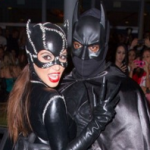 From Gossip Cop: Yesterday was Halloween, in case you missed it. So how did celebrities celebrate and what costumes did they wear? More importantly, what were the Kardashian’s for Halloween? Gossip Cop has the answers: “Kim Kardashian threw a Halloween Birthday Bash at LIV in Miami on Wednesday, and her outfit was purr-fect. The reality star (whose real birthday was October 21) donned a Catwoman costume for the event, while beau Kanye West dressed as Batman. Kourtney Kardashian and Scott Disick went as Batgirl and Robin, respectively, and palJonathan Cheban appeared as The Riddler.” Read more and see pictures here. 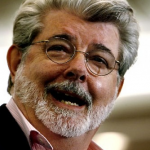 From Geekosystem: In case you missed it in the midst and aftermath of Hurricane Sandy, there was some big geek news: reports Geekosystem, “Just two days ago, The Walt Disney Company announced they acquired Lucasfilm, and that the next Star Wars trilogy would begin in 2015 with Episode 7. The deal was said to cost $4.05 billion, a staggering sum of money that George Lucas plans to put toward funding education. By the end of the year, the deal should be finalized, adding Lucasfilm to the stable of Disney-owned mega-properties along with ESPN and Marvel. After the finalization, George Lucas, who owns 100% of his company, plans to put the bulk of the money into a foundation that will focus on educational issues.” Read more about the announcement here. 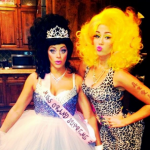 From Styleite: Like Gossip Cop, Styleite is keeping you updated on all the best celebrity Halloween costumes. Writes the site, “While for many of us New Yorkers, lack of transportation and power meant last night’s Halloween festivities were pretty much confined to scary movie marathons at home, celebrities and fashion folk out on the West Coast and beyond celebrated the holiday in all its costumed glory… Among the best of the bunch were Glee‘s Chord Overstreet, who made for a spot-on Brad Pitt with his faux facial hair and long wig, Kate Moss, who blew everyone else out of the water with her smoldering Morticia Addams look, and Miley Cyrus, who made for a surprisingly convincing Nicki Minaj.” Read more and see pictures here. 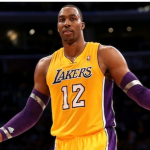 From SportsGrid: If you are without power in the wake of Hurricane Sandy, or if you just decided to spend last night on the town enjoying Halloween, SportsGrid is keeping you up-to-date on what happened last night in sports: “For the second night in a row, the Lakers’ offense looked either severely disjointed or pre-scripted and robotic, and they just couldn’t establish any kind of flow on that end of the floor. But more disturbing was their defensive effort, which is frighteningly reminiscent of Dwight Howard’s days in Orlando – perimeter players drive by their defenders with ease, leaving Howard there to clean up the mess… In our first true nail-biter of the season, Indiana Pacers’ point guard George Hill nailed a floater in the lane to give his team a two-point lead over the Toronto Raptors with two seconds remaining.” Read more about what happened now that the NBA is back here. 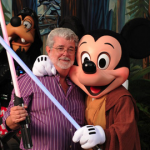 From The Mary Sue: Continuing coverage of the Disney/George Lucas acquisition, The Mary Sue covers where exactly the money will go: “The sale, should it actually go through, will earn Lucas around $4.05 billion since he’s the only owner involved and his company has little to no debt. A spokesperson told The Hollywood Reporter, ‘George Lucas has expressed his intention, in the event the deal closes, to donate the majority of the proceeds to his philanthropic endeavors.’ ..The spokesperson said the money would most likely go into a ‘foundation which will primarily focus on educational issues.’ The Hollywood Reporter takes a guess. ‘Lucas is currently the chairman of Edutopia, which is part of the George Lucas Educational Foundation. He could put money into that or create a new foundation which would be funded from the sale.’ Read more here. 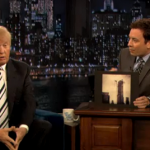 From The Jane Dough: A hurricane may have hit New York City, but Donald Trump isn’t backing down, writes The Jane Dough: “It was tough to get guests for the late night shows this week given all the weather, so it wasn’t surprising that one of the people Jimmy Fallon called was New York fixture Donald Trump. It was a little surprising, though, since Trump has taken the opportunity to be extra-divisive in the wake of Hurricane Sandy, and following his controversial announcement that he will donate $5 million to charity if Barack Obama produces his college report card. Or something… Fallon did push Trump gently on his $5 million bet, after some gentle praise for his successful line of ties at Macy’s. Trump argued that ‘it’s a lot of money for something that’s very easy to produce,’ …but Fallon was undeterred. ‘New Jersey could use it,’ he said rather pointedly, to applause.” Read more here. 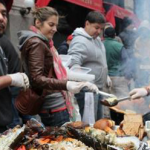 From The Braiser: New York City has a lot of rebuilding to do after Hurricane Sandy — how are chefs in the area faring? Reports The Braiser, “The subways may be (partially) up and running, but 220,000 people and businesses in New York City still don’t have power — and indeed, some of them are chefs. Restaurants operate on an incredibly narrow profit margin, which means four days of lost business can make or break a month — or six months. And that’s why some enterprising owners are making do (and making food) with what they have, or, if all else fails, just giving it away. Mario Batali and Joe Bastianich may have had the most to lose — their food empire includes the 50,000 imported good mecca Eataly — but fellow telegenic chef Tom Colicchio told the New York Post, ‘We’re usually sitting on between $15,000-$20,000 in inventory, and it’s gone.'” Read more about what they did with it here.