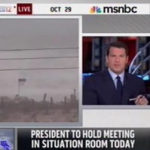 From Mediaite: Hurricane Sandy is headed towards the East Coast as the East Coast is headed to an election. So what does the storm mean for the political candidates? Reports Mediaite, “MSNBC’s political panel guests pondered the impact that the storm could have on the presidential election only eight days away. The panel found that President Barack Obama could benefit politically from the storm as he gets to appear presidential while his surrogates campaign in his place. Mitt Romney, meanwhile, risks appearing callous if he continues to campaign during the storm…. Real Clear Politics reporter Erin McPike …said that, with President Bill Clinton able to campaign for Obama alone and the president back in Washington performing the duties of a chief executive, Obama could politically capitalize on Hurricane Sandy.” Read more of the panel’s opinions here. 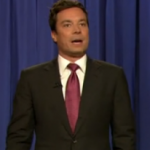 From Gossip Cop: New York City is nearly shut down due to Hurricane Sandy, but the show must go on for some late night stars. Reports Gossip Cop, “For Jimmy Fallon and Jimmy Kimmel, the show must go on — despite the massive hurricane about to pound New York City. Both late night stars have said they still plan to tape new episodes of their respective shows on Monday, with Fallon filming in Manhattan and Kimmel in Brooklyn. For Kimmel, Monday marks the start of a week-long stint in his native borough, a long-planned and highly-promoted change from his usual West Coast-based broadcast. ‘Starting to get windy here in #Brooklyn…I hope our shows don’t fly away,’ Kimmel tweeted on Sunday. Fallon wrote on Twitter Sunday evening, ‘We will be doing a new show tomorrow night no matter what. #LateNight.’ ‘The Late Show with David Letterman’ is also reportedly planning to do a new show from the city, too.” For more details about the shows’ hurricane plans, read on here. 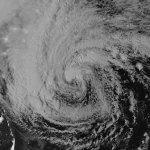 From Geekosystem: For those of you not impacted yet by Hurricane Sandy and still have technology, Geekosystem updates you on the ways you can storm watch online: “For plenty of us, watching Hurricane Sandy’s progression is no big deal — just look out the window. Even in New York, where the Frankenstorm hasn’t hit with its full force yet, it looks really hurricane-ish outside right now. We know that folks in the rest of the country may want towatch the storm’s progression in real time, too, though, whether to keep an eye on loved ones (hi, Geekosystem Moms, we’re fine!) or just rubberneck what’s shaping up to be one pretty serious piece of weather. No judgment here — it’s hard to hear that something might turn into an ice-hurricane and not want to see that. Here are some of the best tools available for monitoring the fall of civilization as we know it on the East Coast.” Check out those ways, including Google Crisis Maps and the Weather Channel Hurricane Tracker, here. 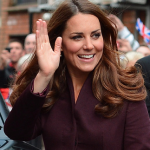 From Styleite: Us East-Coasters may all be stuck inside with Hurricane Sandy, but is the photographer who took topless pictures of Kate Middleton going to be stuck inside for a long time… in jail? Reports Styleite, “The photographer that took topless photos of Kate Middleton may have been able to hide out in the bushes far, far away from the chateau where the royal couple sunbathed while they snapped the shots, but it looks like they can’t hide from the law any longer. UK papers The Daily Mail and The Mirror are reporting that not only has the offending paparazzi been identified, but French police are preparing to make an arrest. The possible penalties for the breach of privacy include a year in prison and a fine of almost $58,000 at current exchange. If you’ll recall, Closer, the French tabloid that first published the photos back in September, was slapped with both criminal and civil lawsuits for their actions.” Read the full story here. 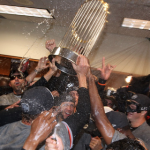 From SportsGrid:  In news unrelated to Hurricane Sandy, Major League Baseball crowned 2012 World Series Champions last night: The San Francisco Giants. Writes SportsGird, “The Giants are World Series champions (again). All postseason, when it mattered most, the Giants were unbeatable. During the World Series, they were unbeatable, period, turning away the Tigers last night in 10 innings to clinch the franchise’s second World Series title in three years. Pablo Sandoval, as one would expect of a guy who had a three-homer game and hit .500, won series MVP honors. If MVP awards could be given to an entire pitching staff, though, the Giants’ group, which allowed just six runs in four games and recorded two shutouts, probably would have taken top honors.” Read more here. 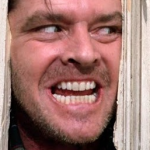 From The Mary Sue: With Frankenstorm hitting the East Coast on Halloween week, many of us will be curled up on our couch watching scary movies. And that may have health benefits, writes The Mary Sue’s Rebecca Pahle: “It turns out that watching horror movies helps you burns calories… but not enough calories to offset a giant bowl of butter-drenched popcorn, so this news isn’t nearly as good as it seems on the surface. A study conducted by researchers at the University of Westminster found that the increased heart rate that results from watching a horror movie will burn approximately the same amount of calories as a half-hour walk… which also happens to be less than what’s in a normal-sized bar of chocolate, but whatever, I’ll take it… The average number of calories burned by watching a 90-minute horror movie is 113, but the study found that some movies, particularly those with regular “jump-scare” moments, result in a substantially larger loss. ” Read more, including the best movies to burn calories, here. 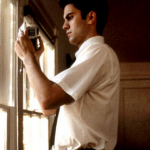 From The Jane Dough: Are you stuck working at home during this hurricane? Us, too. So The Jane Dough has compiled a list of tips to get you through the days. Writes the site, “You’re probably stoked about having the freedom to do your job in your pajamas. That excitement won’t last. You’re going to feel pretty bored and stir crazy soon, so here are a couple ways to not lose your mind while housebound.” They include getting to know your neighbors, actually picking up the phone (gasp!) and reconnecting with people you miss, gChatting your co-workers to stay in the loop, maintaining a normal work pace to quell your fears, and keeping background noise on. Check them out (as well as a list of ways to make holing up for the hurricane feel like summer camp!) here. 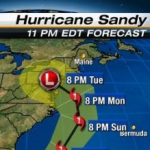 From The Braiser: Many East Coasters are being inconvenienced by Hurricane Sandy — homes evacuated, power outages, flooding and home damage… but for one chef, he’s got a very unique problem: he can’t serve $15,000 worth of truffles. Writes The Braiser, “In the face of the Frankenstorm, Mayor Michael Bloomberg has declared a state of emergency in New York City…  essentially, forcing all of the city to stay home and ponder a life without internet for five hours on Monday. But for Andrew Carmellini, the tragedy is far greater, as he tweets: “Doesn’t Bloomberg and Cuomo know I’m sitting on 15k in White truffle for #trufflepaloza ???” Indeed, earlier this month, Carmellini had unfortunately scheduled his annual Trufflepalooza, a day where he and his restaurant Locanda Verdes erves a three-course meal chock full of truffles, for tomorrow evening.” Read more about Trufflepalooza and its fate here.