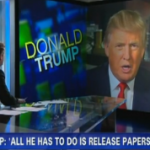 From Mediaite: In case you haven’t heard, Donald Trump’s big “surprise” was an offer to donate to charity if Obama releases his records. He continues to defend it, reports Mediaite: “On Wednesday night, Donald Trump joined Piers Morgan to talk about his recent offer to donate $5 million to any charity of President Barack Obama‘s choice, provided that Obama reveals his college records, passport application, etc. While Morgan insisted it’s an offer Obama will most assuredly refuse, Trump argued it’s for a good cause — and he couldn’t imagine why the president would pass that up. Asked about the backlash to his announcement, Trump denied any such thing, saying, ‘I’ve had tremendous praise for the most part’ …We both know he’s never going to, Morgan said — a point Trump immediately refuted. ‘I think he will,’ Trump said. ‘I hope he will.'” Read more here. 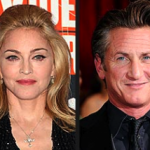 From Gossip Cop: Are Sean Penn and Madonna rekindling their romance? Gossip Cop breaks it down: “‘It’s been two decades from their acrimonious divorce, but Sean Penn wants to give a relationship with Madonna another try,’ begins a piece from Star. Picking up on an exaggerated Us Weekly report claiming Penn went “gaga” for Madonna at her October 11 concert, and then taking it one step further, Star claims the exes “had a secret tryst” after that Los Angeles show. According to a supposed ‘tipster’ for the tabloid, ‘Sean went to support her and hoped it would get the ball rolling on a reconciliation.’ ‘After the concert, the duo went back to her home,’ adds the mag. Wait a second. Madonna, who’s in a relationship with Brahmin Zaibat, brought her ex-husband from the ’80s to the house she shares with her four young children? Unlikely. Regardless, a rep for the Material Girl tells Gossip Cop ‘none of this is true.'” Read the details here. 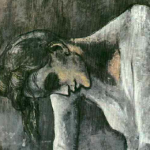 From Geekosystem: Interesting news in the geek art world today concerning a hidden Pablo Picasso painting! Reports Geekosystem, “It’s a known fact that artists have painted over previous works in order to reuse canvases. This has even included borrowed canvases, meaning that one artist would be painting over the work of another. This is typically one of those minute details that gets glossed over in the case of lesser artists, but the fact that Pablo Picasso painted his Woman Ironing over an earlier work has been a point of interest since it was discovered in the eighties. Thanks to a fresh batch of infrared images, the hidden work can be viewed in greater detail than ever. The new infrared images were taken by John K. Delaney, senior imaging scientist at the National Gallery of Art in Washington, by request of the Guggenheim Museum .” Read the full story here. 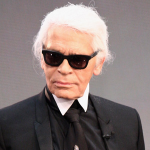 From Styleite: Dream of smelling like Karl Lagerfeld? Your dreams are one step closer to coming true, reports Styleite: “We really don’t come across Karl Lagerfeld‘s eponymous fragrances anywhere. The close we’ve gotten is seeing the ads for Karleidoscope, a scent only available in European Sephora doors, and the vague recollections we’ve been able to summon of the now retro-looking men’s fragrance Lagerfeld, released back in 1978. But, according to a report in today’s WWD, that’s all about to change now that Inter Parfums, a French fragrance licensee has signed on to produce perfumes for Karl Lagerfeld B.V., with the first set to hit shelves in late 2014. Inter also licenses Jimmy Choo, Boucheron, and Lanvin perfumes, and only recently relinquished the Burberry name, which had up until then generated 50% of their sales.” Read all the details here. 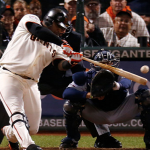 From SportsGrid: Catching you up on everything you missed last night in sports, SportsGrid turns to Game 1 of the Major League Baseball World Series: “Babe Ruth. Reggie Jackson. Albert Pujols. Pablo Sandoval. Which name doesn’t belong? The answer is none: they all belong, because following Sandoval’s power explosion in the Giants’ 8-3 Game 1 win last night, that’s the list of players who’ve hit three home runs in a World Series game. And considering Sandoval his two of his off Justin Verlander, one could make the case his performance might be the most impressive of all. Sandoval, nicknamed Kung Fu Panda for his portly physique and all-bamboo diet, finished 4-for-4 with four RBI.” Read more about what happened to lead the San Francisco Giants to victory here. 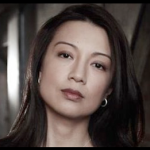 From The Mary Sue: There’s casting news about Joss Whedon’s S.H.I.E.L.D. project, and The Mary Sue’s reporting on it: “Though I guess some people know her from, like, this show called ER, or something? Or,Street Fighter, Stargate, or Eureka. But Ming-Na (who has also worked under her full name, Ming-Na Wen) is also the voice of Disney’s Mulan, even in such non-movie projects asKingdom Hearts. Multiple Kingdom Hearts games. The Macau-born, Hong Kong and American raised actor is our first confirmed new addition toJoss Whedon‘s S.H.I.E.L.D. pilot (not counting Clark Gregg, since his Agent Coulson is a known character), in the role of Melinda May, and just because that name isn’t familiar might not mean we don’t know anything about her.” Read all about who she is here. 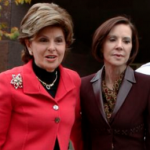 From The Jane Dough: Today, The Jane Dough is once again pondering the purpose of Gloria Allred. Writes Carmen Shardae Jobson, “For anyone that remotely pays attention to tabloid journalism, Gloria Allred is an iconoclast, and she’s making the rounds again as Maureen Sullivan’s lawyer, whose claim to fame is being the ex-wife of Staples honcho Tom Stemberg. Sullivan is still locked in a legal battle with Stemberg after 25 years and a nasty divorce, and now she’s looking to lift a gag order that’s in connection with testimony from Mitt Romney during their divorce proceedings. Juicy! The GOP candidate confided in Stemberg at some point that the Staples stock was ‘overvalued’ because of his ‘poor divorce settlement,’ and the dynamic duo of Sullivan and Allred are looking to serve their own ‘October Surprise’ to Mitt. But the bigger question ought to be (aside from how, all these years later, Stemberg and Sullivan still can’t find some kind of common ground), is how imperative the presence of Gloria Allred is to all of this.”  Read more here. 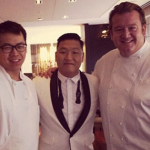 From The Braiser: Want to eat lunch Gangnam Style? Head to Ai Fiori. Writes The Braiser: “Yesterday, Korean rap megastar PSY visited Michael White at Ai Fiori for lunch.. We would like to think that Gangnam Style played over and over in the background as he ate, with waiters screaming at hostesses’ butts, Michael White horse-dancing around the kitchen, and trofie nero flying in a blizzard around PSY, who catches the butter-poached seafood in his mouth. Then Anthony Bourdain pulls up in his Camaro wearing a highlighter-yellow suit, Jean-Georges Vongerichten emerges from an elevator thrusting his hips” etc etc and “everyone is enthralled in the magic of dance, and the world, for one truly glorious moment, experiences peace. Really, though, all PSY did was eat trofie nero and take a picture. No doubt, however, that this exact scenario played through everyone’s heads during lunch yesterday.” See photographic evidence of the event here.