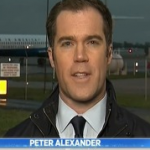 From Mediaite: The fallout from the first Presidential debate continues, as President Barack Obama’s campaign has attacked back at Romney for the second time. Initially, the Obama campaign’s response was that Romney was being less than truthful, and that “Obama was so stunned by Romney’s mendacity that he could not muster even one credible comeback.” What’s happening now, though? Writes Mediaite, “This week, however, the Obama campaign has launched a new initiative – hitting back at Romney on substance. What substance, you ask? Sesame Street.” And NBC News is responding to its “absurdity”: “On Tuesday’s Today, Alexander said that the Big Bird ad is an example of the ‘absurd back and forth in this election season.’ The ad mocks Romney for considering Sesame Street a ‘menace to our economy’on the level of Bernie Madoff.” Read more here. 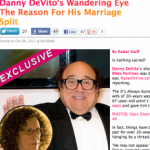 From Gossip Cop: Yesterday brought shocking news of a Hollywood divorce between Danny DeVito and Rhea Perlman, who had been married for 30 years. But now the rumors roll in, and Gossip Cop is setting them straight: RadarOnline says that the divorce is a result of DeVito’s “wandering eye” and “claims that after 30 years of marriage, Perlman was ‘finally fed up with the 67-year-old actor’s flirty and inappropriate ways and gave him the boot.’ Really? Not. At. All. RadarOnline is simply trying to keep the buzz going on the pair’s sad split by alleging that the breakup was more dramatic than it actually was. A rep for both DeVito and Perlman tells Gossip Cop the webloid’s report that the couple separated because of the actor’s alleged ‘wandering eye’ is a complete ‘fabrication.'” Read the story here. 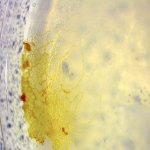 From Geekosystem: Another big break-through in science today, as for the first time, creatures without a brain have demonstrated possession of memory. Reports Geekosystem: “The slime mold Physarum polycephalum is not traditionally regarded as exactly the brightest of life forms. Much of this perception has to do with the fact that a slime mold is a single-celled organism that has no brain or neural structure, which is really a pretty solid reason not to give a creature much credit in the intellect department. Despite this, though, slime mold has proven surprisingly capable of solving simple tests and mazes in lab settings. Now, researchers have even uncovered evidence that the mold doesn’t need a brain to demonstrate that it uses memory as a problem solving tool.” Read more about it here. 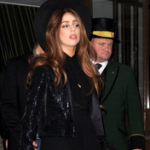 From Styleite: Lady Gaga made a controversial move (surprise) by meeting with WikiLeaks founder Julian Assange. But what did she wear for such an outing? Writes Styleite, “We should’ve seen this one coming — Lady Gaga is the first celebrity to step out in Hedi Slimane‘s first collection for Saint Laurent since the show walked in Paris last week. The pop star already took to Twitter to voice her support for the designer, calling him ‘a true punk visionary.’ But outfits speak louder than words, and we have confirmed that yesterday she donned a full ensemble from the collection: a black, sequined jacket paired with a ruffled blouse and billowing maxi skirt. The hat, it should be noted, was not one of the runway pieces. We imagine those don’t travel so well, anyways.” Read on and see a picture of the outfit here. 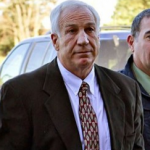 From SportsGrid: The scandal that rocked the sports world –  former Penn State football coach Jerry Sandusky’s child sex abuse allegations – is finally over. Today, he has been sentenced to 30 to 60 years in prison. Reports Sportsgrid, “Jerry Sandusky faced up to 442 years in prison after being convicted on 45 counts of sexual abuse of children in June. And despite his last, desperate pleas leading up to today’s sentencing, it was a foregone conclusion he’d be going away for a long time… Now, Sandusky is 68 years old, so ‘not less than 30 years’ and up to 60 means that, unless he lives longer than any human ever has, this is a life sentence. Still, when we all saw that ‘442 years’ number a few months back… it was easy to picture something in the triple digits for Sandusky today, and the fact that it was something short of that immediately made many people wonder why his sentence wasn’t more harsh.” Read more here. 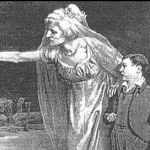 From The Mary Sue: Well, this is exciting news: Reese Witherspoon is producing a gender-swapped version of Great Expectations for the CW. Writes The Mary Sue, “It will be simply be called Expectations and is a modern telling of the classic Charles Dickens tale. There’s just one big difference, the orphan protagonist will be a lady. ‘The CW’s version of the literary classic, first published in serial form in the late 1860s, revolves around a small-town girl with big dreams of making it in the city who is quickly disillusioned by the harsh reality of living in San Francisco — that is, until her fortunes unexpectedly turn thanks to an anonymous benefactor,’ writes The Hollywood Reporter. ‘Lethal Weapon 4 co-producer Mills Goodloe is on board to write and executive produce the hourlong drama with Reese Witherspoon executive producing through her Pacific Standard shingle.’ Interesting. Very, very interesting.” Read the whole article here. 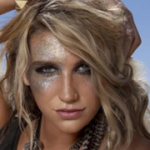 From The Jane Dough: Well, if you had dreams of writing a book, you should probably stop having them: both Ke$ha and Lena Dunham have now inked booked deals – with Dunham signing for $3.5 million). But the Jane Dough’s Laura Donovan explains why she’s more excited about Ke$ha’s: “Dunham is a writer and show creator and Ke$ha is a pop singer who has made a name for herself doing and saying odd things. Ke$ha prides herself on being a trainwreck while Dunham stays on her toes running an HBO program, penning New Yorker essays, and attending early morning exercise classes. In other words, Dunham has her life together and knows how to manage her time far better than most of us. But unlike Dunham, Ke$ha didn’t come from a cushy New York household or a $30,000+ per year high school, and I’m interested in hearing about how the musician went from a life on food stamps and welfare to a successful singing career.” Read more here. 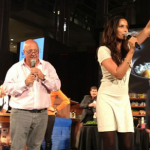 From The Braiser: How much would you pay to eat ham off of Padma Lakshmi’s body? Yes, this is a real question, because last night, someone paid $1,000 for just that, eating the meat off her collarbone. The Braiser writes that last night the biggest culinary fundraiser in our nation’s capital, DC Central Kitchen Food Fight, took place: “By all accounts the night was a success, raising over $600,000 to battle hunger. But for now we’d like to highlight some of the more peculiar ways that they managed to raise less than 1% of those funds, namely: letting people eat Iberico ham off your body (if you’re Padma Lakshmi), or spoon-feeding people iguana meat (if you’re Anthony Bourdain and/or Andrew Zimmern.)” See pictures of those bizarre ways they raised money here.