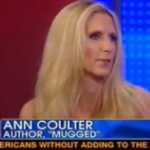 From Mediaite: The Presidential debates began last night, and the political pundits were out to play. Many dubbed Romney the winner, including (unsurprisingly) Ann Coulter… but her comments took a strange twist, reports Mediaite: “Author and pundit Ann Coulter visited the Fox & Friends set on Thursday, where she began her analysis of the previous night’s debate by saying that Barack Obama was essentially telling the American people that he didn’t really want the job of president and would ‘rather be golfing’…  ‘I watched it again and toward the end was actually watching it and the visual made it so much worse, Obama was depressed and looking down. You could see at the end of the debate, he knew that, anniversary or not, Michelle wanted to go home with Mitt.'” Read more about Coulter’s analysis here. 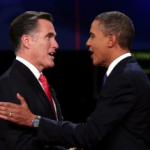 From Gossip Cop: Media personalities weren’t the only people in the spotlight responding to last night’s debates, celebrities took to Twitter to share their thoughts as well. Writes Gossip Cop, “The first 2012 Presidential debate took place on Wednesday night, with President Obama facing off against challenger Mitt Romney. The exchange, moderated by Jim Lehrer, elicited a range of responses from celebrities on Twitter — some serious, some humorous and all of them entirely debatable. And while the candidates disagreed on several issues, it seems the viewers at home all agreed that Lehrer wasn’t up to the job of moderating.” For instance? “What r u doing, Jim Lehrer? What r u doing?!” wrote Julia Louis-Dreyfus, while Conan O’Brien tweeted, “Just noticed that Jim Lehrer has no whites in his eyes. #Discuss.” Read more of what they had to say here. 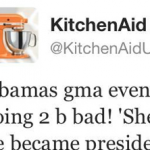 From Geekosystem: Continuing on the topic of debates and Twitter, the platform saw a huge boost in tweets during the event, confirming that this is the first Presidential election with a real social media push somewhere. As many Twitter users employed hashtags and handles to make their message heard, it couldn’t all go smoothly. Reports Geekosystem: “It was honestly inevitable that someone, somewhere, would accidentally tweet something horrible about the presidential debate from their company’s official Twitter account. KitchenAid, however, was so far down that list that their sudden faux pas was most unexpected. Obviously thinking that they were on their personal Twitter handle, a member of KitchenAid’s Twitter team joked that Obama’s grandma, Madelyn Lee Payne Dunham, died just before he took office because she knew how terrible it’d be. Stay classy, people.” Read more here. 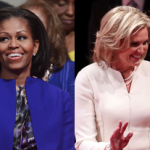 From Styleite: While many were deciding which candidate won the debate, Styleite is investigating the winner of First Lady fashion: “Michelle Obama opted for a vibrant indigo Preen dress and matching jacket from the Fall 2011 collection, but while her colorblocked dresses from the label have made for some of our favorite sartorial outings from the First Lady, this look fell short. The cropped, shrunken jacket paired with the high-waisted skirt shortens her waist, while the color, though undoubtedly a flattering choice for Obama, has the unfortunate effect of making her blend in to the backdrop… Ann Romney, meanwhile, wore a fitted ivory skirt suit with for an effect that was both pristine, poised, and (thanks to the stretch material and zip-up front) ever-so-slightly sporty. The look was topped off with a strand of pearls, a chunky mother-of-pearl bracelet, beige patent pumps, and *gasp* is that a hint of a peplum we see? Despite this fact, however, the ensemble didn’t take much of a sartorial risk — unless you count wearing white after Labor Day, that is.” Read more and see pictures here. 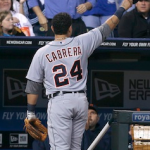 From SportsGrid: Not everyone could focus on the debates, since there was a rather large night happening in the world of Major League Baseball, the last night of the regular season. The Yankees took the AL East, the Oakland Athletics took the AL West, and one Detroit Tigers player celebrated a big win as well, reports Sportsgrid: “It’s been a crazy final day of the 2012 MLB regular season. We’ve got A’s winning divisions, O’s falling back into Wild Cards, and the other 24 letters of the alphabet not really caring about baseball. But on top of the great team drama, we get something on the individual scale we haven’t seen in 45 years — an offensive Triple Crown winner. Not since Carl Yastrzemski in 1967 has a player in either league led all others in batting average, home runs, and RBI at season’s end. Miguel Cabrera did it in 2012, and if all you offense romanticists still aren’t satisfied, he might not even win MVP.” Read on here. 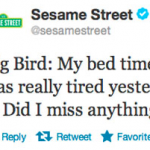 From The Mary Sue: Though baseball fans may not have been paying attention to the debates, Big Bird (yes, that Big Bird) was. Why? Well, writes the Mary Sue, Mitt Romney talked “about cutting the government’s funding of PBS (all 0.01% of it). As if that wasn’t awkward enough, considering the debate was being moderated by long-time PBS journalist Jim Lehrer, Romney also name checked Big Bird. And it was the ‘OH SNAP!’ heard around the world. Twitter saw a huge rise in ‘Big Bird’tweets seconds later and continuing on through the night with mostly everyone coming to the yellow fowl’s defense. But today, something even more amazing happened. Big Bird responded, in his own Big Bird way, from the Sesame Street twitter account.” See what he said here. 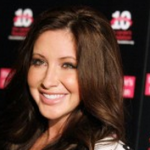 From The Jane Dough: Going back to Presidential Debate of 2008, it turns out that in 2012 the Palin’s are still famous. Namely, Bristol, who has something to say about her mom. Writes The Jane Dough’s Laura Donovan, “Dancing with the Stars contestant Bristol Palin… said her mother Sarah Palin is ‘way hotter than’ actress Julianne Moore, who played the former vice presidential candidate in 2012 film, ‘Game Change.’ On Moore’s Emmy win for her portrayal of the former Alaska governor, 21-year-old Bristol said, ‘I don’t think she is a good interpreter of my Mom, I think my Mom is way hotter then that, she doesn’t have that accent and it’s all kind of silly…My Mom’s awesome.’ What do you have against redheads, Bristol? I’m pretty sure it’s no easy feat to land an Emmy, and Moore definitely did her homework for the role.” Read more of her thoughts here. 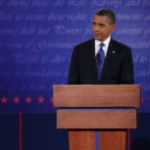 From The Braiser: And finally, to finish out the theme of last night’s debates on the Abrams sites: We’ve talked about political pundits and celebrities taking to Twitter to respond, but what about celebrity chefs? The Braiser has that covered: “Should we be looking to our nation’s top chefs for political analysis and insight into last night’s debate between Mitt Romney and Barack Obama? Probably not, but they’re far more entertaining and unfiltered than most of the punditry crowding Twitter at the moment. And with the unexpected performances from both candidates (as well as an impotent moderating effort from Jim Lehrer), the chefs had more zingers than Mitt Romney’s debate prep team.” Such as? Alex Guarnaschelli tweeting “I’d like to see the presidential candidates compete in the #Chopped kitchen,” and Rachael Ray, whose “debate fiesta” included “salsas, guac, manzano peppers stfd w blk beans & green rice, beef & guajillo tacos w fixins, griilled corn w chipotle cream.” Read more here.