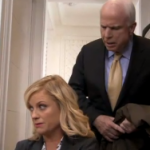 From Mediaite: Last night brought beloved NBC primetime comedies back to our televisions, and Parks & Recreation featured some very special political cameos. Reports Mediaite, “The season premiere of NBC’s Parks and Recreation featured cameos from not one, but three senators. First there were two of Leslie Knope‘s idols, Senators Barbara Boxer and Olympia Snowe. Later, an appearance by Sen. John McCain — whom a cranky Knope didn’t even bother to turn around and recognize. The episode took place in Washington, D.C., where Leslie was disheartened after being unable to snag a meeting for her river cleanup project. Later on, attending a party with Ben Wyatt, Leslie was introduced to Boxer and Snowe, who are numbers two and 46 on her list of amazing women.” Read more here. 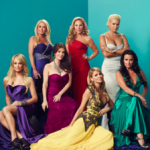 From Gossip Cop: Season Three of The Real Housewives of Beverly Hills is set to premiere in a little over a month, and our first promo is here. It is obviously full of drama, scandal, lies, and even a new cast member! Reports Gossip Cop of the new RHOBH video, “[I]t’s pretty insane. In the clip, we see Adrienne Maloof’s house catching on fire, Kim Richards getting a nose job and telling her sister Kyle that she almost died, and Paul Nassif going at it with Brandi Glanvilleand Lisa Vanderpump’s husband Ken. New ‘Housewife’ Yolanda Hadid also appears, along with Suzanne Somers, who tells the ladies, ‘I just have never felt this sexual.’ The show premieres on November 5. Do you think the new season looks… interesting?” Read more and watch the video here. 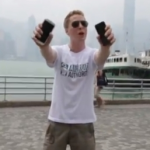 From Geekosystem: Well, Apple’s released a new product (the iPhone 5, if you live under a rock) and therefore: it’s drop test time. Writes Geekosystem, “It’s that time of year again, when Apple releases a new device and it and its rival device have to be dropped on a hard surface from terrifying heights. You know, so we learn not to drop our expensive, delicate pocket computers, because we don’t know not to do that before seeing the extent of the damage. With the iPhone 5 shipping today, it’s probably best to get this drop testout of the way so you can be sufficiently scared of dropping your new expensive toy. However, compared to last generation’s iPhone 4S vs. the Samsung Galaxy S II drop test, this test yields some surprising results.” Find out what they are here. 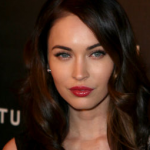 From Styleite: Heart transplants, liver transplants, …eyebrow transplants? Yes, they’re real. Reports Styleite, “Full eyebrows have been a big beauty trend for some time now, but some ladies are tired of having to fill in their own with wax and powders. Instead, they’re paying big bucks for eyebrow transplants in the hopes of getting Megan Fox‘s thick arches permanently. According to the New York Post, plastic surgeons have seen a 30 percent increase in eyebrow transplant demand, and that Fox and the Kardashian sisters’ arches are the most requested styles… Docs say that the full brows trend originated from couture beauty looks that designers sent out about four years ago. Since then, celebs have embraced thicker brows, which obviously trickled down to the masses.” Read the article here. 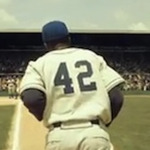 From SportsGrid: The trailer for ’42,’ the movie about Jackie Robinson, is here, and Sportsgrid has some (positive) thoughts. “It’s Epic: So maybe it’s just the epic orchestral score that sends chills down your spine, but we’re excited anyway. Harrison Ford will plays Branch Rickey, the man who signed Jackie Robinson to a minor league contract that eventually paved the way for him to break the color barrier in Major League Baseball, and Robinson’s character is played by Chadwick Boseman. The movie is written and directed by Brian Helgeland, and set to release just before the start of the 2013 baseball season… This story has been portrayed in film once before, with Robinson playing himself in the 1950 movie “The Jackie Robinson Story.'” Watch the trailer here. 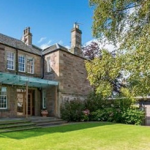 From The Mary Sue: Looking to buy a house? A big one? In Scotland? Previously owned by a famous author? For a lot of money? You’re in luck! Reports The Mary Sue, “For a mere £2,250,000—approximately $3,658,500 in US dollars —you, yes you, can own the Edinburgh house where J.K. Rowling wrote much of the Harry Potter series. The author has put the house, where she lived with her husband and three children before moving to the village of Barnton in 2009, on the market, and while it’s no Hogwarts, the place still sounds pretty cool… In addition to having five double bedrooms (not sure what makes a bedroom “double,” but OK), a drawing room, fancy landscaped gardens and a library, the home is outfitted with a high-tech security system and a concealed door leading to the staff quarters.” Read more here. 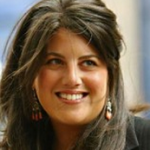 From The Jane Dough: Remember when we reported that Monica Lewinsky was penning a tell-all book? Want to hear even more frustrating news? Here goes: writes The Jane Dough, “Some of us have spent our lives dreaming of landing a book deal, but apparently all we have to do is mess around with the president to receive a multi-million dollar publishing contract. Monica Lewinsky, who is reportedly putting together a tell-all on her affair with former President Bill Clinton, is allegedly cashing in $12 million for the project. Friends told the New York Post that the soon-to-be 40-year-old is looking to get revenge on the ex slimeball-in-chief. Sources said Lewinsky will also include letters she penned for Clinton.” Read the story here. 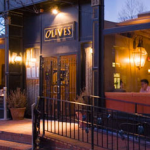 From The Braiser: Todd English just can’t seem to stay out of legal trouble. Reports The Braiser, “How many lawsuits does Todd English have on his plate? According to theBoston Globe, the magic number is “at least six”! And the latest hits closest to home — actually, it hits directly at home: a realty company is suing English for unpaid rent at his flagship restaurant, Olives. Proving that English has as many lawsuits as he does reality television shows and commercial exploits, the suit, filed in Suffolk Superior Court, says that he owes his Boston landlords $723,000 in unpaid rent. Though the restaurant had temporarily closed after a kitchen fire and recently reopened in April (to tepid reviews), the plaintiffs, Carey Realty and City Square Holdings, say that the fire — and all the unpaid rent accumulating afterwards — was totally English’s fault.” Read more here.