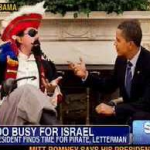 From Mediaite: Yesterday was “National Talk Like a Pirate Day.” In other news, Fox & Friends is still ripping Obama. How do these two things relate? Answers Mediaite, “Fox News Channel’s Fox & Friends issued another correction after Thursday’s program. The morning program featured a picture that was sent out on President Barack Obama’s twitter account which showed the president sitting with a man dressed as a pirate in observance of ‘national talk like a pirate day.’ Fox & Friendssaid that the president had time for a pirate but no time for Israeli Prime Minister Benjamin Netanyahu. Fox & Friends later noted that the picture in question was taken in 2009… The chyron which captioned the image reinforced the notion that Obama was shirking his official duties as President of the United States.” Read more and see the picture here. 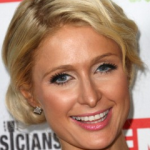 From Gossip Cop: Is Paris Hilton anti-gay? In recently released secret audio footage, she makes some unfortunate comments about the gay community. Reports Gossip Cop, “Paris Hilton calls gay men ‘disgusting’ and says most of them ‘probably have AIDS’ in comments secretly recorded during a taxi cab ride in New York earlier this month. The socialite’s shocking remarks were made on September 7, when she was in the city for Fashion Week. In the audio, Hilton’s friend, a gay man, can be heard talking about Grindr, an app known for facilitating hookups. She responds, ‘Eww… Gay guys are the horniest people in the world.’ The friend says, ‘Gay guys are too much,’ to which Hilton is heard saying, ‘They’re disgusting… and, dude, most of them probably have AIDS.'” Read her rep’s statement and listen to the audio here. 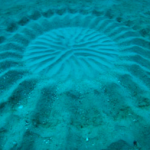 From Geekosystem: You may have heard theories about the origins of crop circles, mostly that aliens are responsible (a la Mel Gibson’s Signs.) But did you think fish could build them? Reports Geekosystem  of an underwater structure built about 80 feet underwater off the coast of the southern Japanese island of Anami Oshima: “Considering no one had ever encountered anything like it, diver and underwater photographer Yoji Ookata was at a loss to explain what had built the circular, repeating, and clearly geometric structure. The architects of this feat of underwater engineering were discovered by Japanese broadcaster NHK, and the answer to what built thesix and a half foot wide structure is at once mundane and really impressive. The builder, it turns out, was a single ordinary — but exceptionally hard-working – pufferfish.” Read more here. 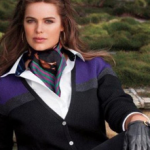 From Styleite: Plus-Size Model Robyn Lawley is doing groundbreaking, good work. Styleite reports, she “has already earned her stripes as a plus-size high fashion model, posing for the covers of major magazines including French Elle, Vogue Australia and Vogue Italia, as well as fronting a much-lauded lingerie campaignf or British brand Boux Avenue. Now, however, she’s landed what’s arguably her biggest gig yet, as Ralph Lauren‘s first-ever plus-size campaign model. While most of the label’s faces are runway regulars who clock it at about a size two (and have been known to be whittled further by Photoshop), Lawley is 6’2 and, as she told Good Morning America yesterday, wears a size twelve. Which, as luck would have it, is just shy of the size the average American woman currently wears (a 14). About time that a label that bills themselves as all-American find a model that at least inches towards representing their customers, isn’t it?” Read more here.

From SportsGrid: Big game this weekend: Notre Dame v. Michigan. But are the Fighting Irish rooting against themselves? Reports Sportsgrid, “Notre Dame and the Michigan have combined for three of the greatest finishes in all of sports the last three years. They’re playing under the lights of Notre Dame Stadium this Saturday, and the Fighting Irish are currently favored by 4.5 points in what has the looks of another great game.In a rivalry like this, you’d expect both schools to want to win, badly. Right? Well, then why did Notre Dame Stadium have a ‘BEAT THE IRISH’  banner in front of it, complete with the Wolverines’ ‘Block M?’ Are they going to throw the game? Is this a conspiracy?! It turns out, it was a prank! And it was pulled by Michigan students! Aha!” Read on and see a picture here. 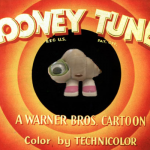 From The Mary Sue: That’s not all, folks… because Warner Bros. is making a new Looney Tunes movie! Writes The Mary Sue’s Jill Pantozzi, “Some might call it a reboot but we’re of the mind Looney Tunes never went away, so we’ll refer to this as a return to stardom. Warner Bros. has made a deal for a new Looney Tunes movie with Harry Potter producer David Heyman onboard and former SNL cast member/the creator and voice of Marcel the Shell, Jenny Slate, writing the script. I’m pretty sure this is going to be awesome. You could liken it to the comeback of The Muppets last year since Bugs Bunny and all his pals haven’t really been front and center for a while. The last we heard or saw of them was in 2003′s Looney Tunes: Back in Action, but this new project has a good team behind it which leads me to think it will be something special.” Read the whole article here. 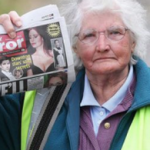 From The Jane Dough: Joyce Pugh is 81-years old, lives in Great Britain, and is cooler than you will ever be. Why? Answers The Jane Dough, “Ever feel too sleepy to wake up and go to work? Quit your whining. 81-year-old great-grandmother Joyce Pugh, who has maintained her paper route for 41 years, is the world’s oldest paper delivery girl and has never taken a sick day off. The British woman drops off copies of the Shropshire Star every day to residents of White Grit, England. She has just been named by the Guinness Book of World Records as the oldest papergirl around, and the widow has ridden more than 10,000 miles during her time on the job. The grandmother of eight and great-grandma of four started picking up paper delivery shifts in 1971, when her kids needed some help with the duties.” Read the full story here. 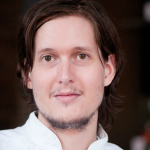 From The Braiser: The Graham Elliot dramatic fallout continues, reports The Braiser: “Earlier this week, it was announced that the executive chef of Graham Elliot’s eponymous restaurant Andrew Brochu had quit, leaving Graham to helm the kitchen with corporate executive chef Merlin Verrier and pastry chef Bryce Caron. Now, Caron has announced that he, too, will be leaving the resto. Here’s the scoop:Apparently, after Brochu’s departure, Graham and Merlin wanted to revamp the menu with a 5-, 10-, and 15-course tasting menu, in addition to making everything available an a la carte. Bryce thought adding the a la carte option was superfluous, which affected him because he was looking to move into Brochu’s position after his departure in an effort get back into savory cooking. Graham didn’t seem to be receptive either to hiring Caron as the replacement exec chef right away or nixing the a la carte menu, and so the tension came to a boil, and Caron walked out.” Read more here.