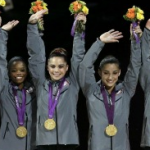 From Mediaite: You’re an Olympic athlete. You’ve just won a gold medal. What could possibly be bad? Oh yeah — taxes. Reports Mediaite, “According to a report from Americans for Tax Reform, the conservative group headed by Grover Norquist, America’s gold medal-winning Olympians will have to pay the Internal Revenue Service nearly $9,000 for every gold they take home from London… America’s winning Olympians are responsible to the IRS for the taxable income that gold, silver and bronze medals represent when they return from the quadrennial summer games. In fact, they are taxed at the top income rate – 35 percent – and, while the commodities price for the precious metals is less than $1,000 for each prize, the prize taxes that the athletes must pay is far greater.” Read more about the finances behind Olympic victory here. 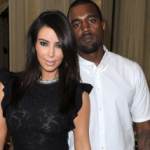 From Gossip Cop: Another day, another celebrity sex tape scandal/rumor. Today’s victim? Kim Kardashian. Gossip Cop reports on the claim: “According to Star, the reality TV personality is ‘still trying to live down’ the infamous video she made with ex-boyfriend Ray J, so she’s ‘horrified’ that new beau Kanye West ‘wants her to make another’… The rapper ‘swears that their filmed fornication will be art, not porn,’ claims the magazine. But Kardashian isn’t sold on the idea. Star’s ‘insider’ says she’s curious, but ‘scared to take the idea to her momager, Kris!'” So is it true? Responds Gossip Cop, “Kardashian and West are not making a sex tape. They’re not discussing a sex tape with Jenner. As a source close to the couple tells Gossip Cop, the Star story is ‘stupid.'” Read more about the rumor here. 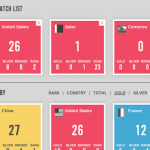 From Geekosystem: Are you having a hard time keeping tabs on all the results at the Olympic games? Well here’s some vital information for your everyday life: there’s help in the form of a new site called Medal Count. Reports Geekosystem, “The London 2012 Olympics coverage can be a pain to keep track of on one’s own. That’s not even considering the time delay if you can’t manage to find a way to view the events live. Luckily, the good folks of ANIMAL have come to the rescue. They’ve crafted Medal Count, a nifty website with regular updates that keeps track of all the medals won by the various countries… Though Medal Count only exists to serve this singular purpose, it handily tallies all of the medals whilst providing a nice list of upcoming events just to the right. Those navigating the site can even add certain countries to their watch list — just in case they really want to know if Guam earns a medal.” Read more about the site here. 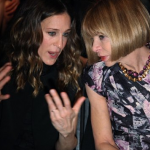 From Styleite: A lot of good things are going to combine on the upcoming season of Glee, and Styleite is excited to report on them. Writes the site, “Sarah Jessica Parker is going to have a recurring role in the upcoming season! SJP will be playing an as-yet nameless Vogue.com editor, Fashionista says. So far it’s kind of unclear how that relates to the main cast’s story lines, but we do know that season 4 will follow them after graduation and that at least Rachel and Santana are headed to New York, so maybe they’ll run into her there. And who will be helping to dress SJP for the show? None other than Anna Wintour herself — we can’t have anything attached to the Vogue name on national television looking anything less than worthy of its prestige. Also, Wintour’s daughter, Bee Shaffer, works for the company that produces the show.” Read the full story here. 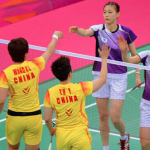 From SportsGrid: The first Olympic scandal seems to have arrived. Reports Sportsgrid, “Yeah, you love the competition of the Olympics, you love the spirit of community and the way the event allows so much of the world to come together as one… but let’s face it, what youreally love is controversy. Japan handing over some money while filing a scoring appeal in gymnastics? It sounded promising, but they were just following protocol. A protest over a fencing decision that left the defeated in tears? Getting warmer, but it can’t compete with what a few women’s badminton teams from China, South Korea, and Indonesia have given us….a bona fide match-throwing scandal, complete with eight players getting thrown out of the Olympics altogether. And while the South Korean and Indonesian teams are appealing the decision, based on comments of people who saw it, it didn’t look good.” Read more about the controversy here. 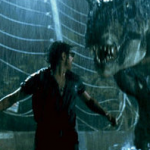 From The Mary Sue: Today, there’s some great rumors for Jurassic Parkfans. Reports The Mary Sue, “Unfortunately for the world (but fortunately for us nerds), billionaire Clive Palmer has either never seen Jurassic Park, or has too much money to care, because rumor has it that he’s going to try to clone a dinosaur from DNA so he can set it free in his new Palmer Resort in Coolum, Australia whether we like it or not… According to Sunshine Coast Daily, while Palmer has not released an official statement, a source close to the billionaire revealed that ‘he has been in deep discussion with the people who successfully cloned Dolly the sheep to bring his dinosaur vision to life.’ Plans for his resort are also said to include ’20-story sky needle and a giant, London Eye-style ferris wheel.'” Read more about his plan here. 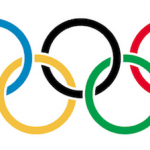 From The Jane Dough: Continuing their coverage celebrating women in the Olympics, The Jane Dough analyzes the IOC’s mandate for female athletes, and whether it’s a step in the right direction. Writes the site, “Earlier this month, after weeks of back-and-forth negotiations, Saudi Arabia announced it would send two women to the Olympic Games. No, it was not Saudi officials’ choice. In the months leading up to the London 2012 games, the International Olympic Committee issued an ultimatum: Send women from your country to the games, or don’t send any athletes at all… Our first instinct was to cheer — hey, it was only two women but at least it was something. But others weren’t so enthused. Saudi Arabia only sends two women to the Olympics, after what was tantamount to a threat from the IOC? Why are we celebrating? And in a way, the naysayers are right. But should we really label this victory a draw? It’s not quite that simple.” Find out why here. 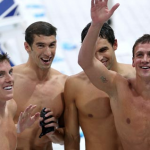 From The Braiser: Rounding out today’s Olympics coverage on the Abrams sites, The Braiser chips in with the report that Olympic swimmers not only chow down on McDonalds, but rely on it and consider it healthy. Writes The Braiser, “A Wall Street Journal profile of the glorious, musclebound, goofy swimmers of Team USA reveal that they not only eat plenty of junk food, they rely on it to meet absurd nutrition requirements for their training. How absurd? Think nearly 9,000 calories a day. Ryan Lochte, for instance, ate nothing but McDonald’s in the days leading up to the 2008 Olympics. The results: four medals, one of them a gold medal for the 200-meter backstroke. The “ripped, 6-foot-6, 220-pound” Nathan Adrian will scarf down an entire Funfetti cake — the cake of choice for twentysomething-year-old women who laugh with their mouths open — with a warm glass of milk.” Read more of their habits here.