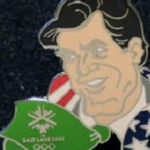 From Mediaite: The Olympics begin tomorrow, and after all the controversy over where Ralph Lauren’s opening ceremony outfits were made (China), there’s a new twist to the tale featuring the one and only Mitt Romney. Reports Mediaite’s Tommy Christopher, “Bill Burton‘s pro-Obama SuperPAC Priorities USA Action sent out a memo Thursday morning, in support of their ‘Romney’s Gold’ Olympic ad, which points to ABC News’ reporting on Republican presidential candidate Mitt Romney‘s 2002 Winter Olympics, and some of those games’ memorabilia that was manufactured outside the US. Most symbolically damaging to Romney is the fact that lapel pins featuring his likeness were made in China, a literal badge of the Obama campaign’s outsourcing attacks.” Read more about these pins here. 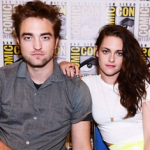 From Gossip Cop: Continuing coverage of the Kristen Stewart cheating scandal that rocked the celebrity world, the site reports that Robert Pattinson has left the Los Angeles home he shares with her after she admitted to cheating on him with Snow White and the Huntsman director Rupert Sanders. Writes Gossip Cop, “The actor, who has not publicly commented on the Stewart-Sanders matter, is said to have departed the house and, at least for now, cut off contact with his girlfriend, according to People. Gossip Cop’s sources tell us Pattinson was ‘blindsided’ by the cheating story and is currently very ‘upset,’ although it’s not been established whether his exit from the house is permanent… On Wednesday, Stewart acknowledged the indiscretion and apologized to Pattinson in a public statement. Sanders followed with his own apology to his wife and children.” Read more about the incident, including full coverage of the developments, here. 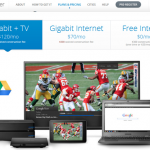 From Geekosystem: Though Google Talk may have crashed for the “majority of users” this morning, Google Fiber (their experimental broadband internet network infrastructure that uses fiber-optics) made some cool new announcements. Reports Geekosystem, “[T]hey’re moving on to the next phase by allowing Kansas City citizens to pre-register between now and September 9th. If their neighborhood meets a certain quota, they’ll then receive Google Fiber access and be able to sign up for free Internet access… The biggest catch here is that only Kansas City, KS and Kansas City, MO are offering Google Fiber right now. It’s where all of Google Fiber’s infrastructure is currently located and there’s no word yet on when it might come to a town near you. Another catch is that they require pre-registration, which costs $10, but also require entire neighborhoods to meet a quota to become a ‘fiberhood’ and gain access to plans.” Read the full article here. 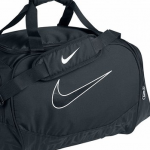 From Styleite: In the same vein as Mediaite’s Mitt pin controversy, Styleite reports upon the latest Olympics uniform scandal. Points out contributor Samantha Randazzo, the U.S.A. teams’ gear may have been made in China, which, while scandalous, is legal. She continues, “What the Egyptian Olympic committee is doing, however, is very illegal: they’re dressing their athletes in counterfeit Nike gear. And not only are they doing it, they’re being totally open and unapologetic about it, according to The Canadian Press. Gen. Mahmoud Ahmed Ali, the committe chairman, told the AP in a phone interview that they ‘signed with a Chinese distributor in light of Egypt’s economic situation.’ The economic situation that Ali is referring to is, of course, the decimation of Egypt’s tourism industry and a mass exodus of investors following the country’s recent political revolution, but what he said is still a euphemism for,’We can’t afford the real thing, but want to look cool so we’re buying knockoffs.'” Read more, including Nike’s response, here. 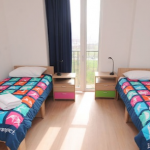 From SportsGrid: Olympic fever continues over at Sportsgrid… quite literally. The site reports on the hot living conditions of the athletes due to a shocking lack of air-conditioning in the Olympic Village for, well, almost everyone. Writes Sportsgrid, “[A]pparently, whether Olympic athletes want to just take a nap in their rooms, or partake in any other “activities,” most will have to do so without the comfort of air conditioning. According to MSN, Great Britain is only providing air conditioning in the dorms of its own athletes, despite temperatures reaching the 80′s. USA Today reported the rest of the athletes are being forced to bring in fans, much like college students in a regular dorm… So while the Brits can max and relax in their dorm rooms, the rest of the athletes are being forced to sweat it out.” Read more, including Lolo Jones’ tweet about it, here. 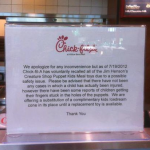 From The Mary Sue: Continuing their coverage of the very public showdown between Chick-Fil-A and The Jim Henson Company over the chicken company’s publically anti-gay stance, The Mary Sue notes that they may have moved into another phase entirely: “PR Meltdown.” Writes the site, “[S]igns.. have been cropping up in Chick-Fil-A locations around the country, explaining to customers that the reason why their kids meals are coming without toys is because the Jim Henson Co. manufactured puppet parts that are dangerous to children. That is, it’s not a petty reaction to the Jim Henson Company announcing that they would no longer be partnering with Chick-Fil-A in the future and would be donating the proceeds of their latest business transaction to GLAAD, following the admission by Chick-Fil-A’s president Dan Cathy that his company was unashamed of and unafraid to continue their monetary support for anti-marriage equality organizations considered hate groups by the Southern Poverty Law Center.” Read more about the two companies’ decisions here. 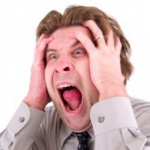 From The Jane Dough: Do you curse at work? Maybe you should stop. Reports The Jane Dough, “A new CareerBuilder report shows that 64 percent of employers think less favorably of employees whose vocabulary emphasizes words of the four-letter variety, according to Fox Business. Sadly, this report also showed 95 percent of employees curse in front of coworkers — and more than half curse in front of bosses. Of course, if this data were true, it’d mean everyone’s thinking really poorly of everyone else at the office all the time, which seems unlikely. Interestingly, the younger the worker, the less likely they were to curse, the report shows. Workers aged 35 to 44 were the most likely of all the respondents in the report to claim they cursed. Those between the ages of 25 and 34 were the least likely.” Read more about the study here. 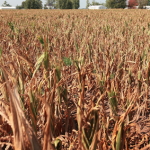 From The Braiser: Here at the Abrams headquarters in New York city, it’s been an absurdly hot summer. But around the country, it’s been worse – a dry one. So dry, your pork is going to cost more next year. Reports The Braiser, “While the majority of the East Coast is enjoying a surprise bounty of cheap lobsters thanks to the absurdly warm summer, for the rest of the country, the heat wave translates into the worst drought since the 1950′s. And with the drought hitting 60% of all crops — particularly the mighty corn — agricultural economists predict that the price of grain-fed animals will go up in 2013.Specifically: beef and pork are going to cost more.. Already the price of feed is being pushed up in anticipation of corn shortages, and with feed costs making up the bulk of meat production, ”consumers are certainly going to feel it,” USDA economist Richard Volpe tells HuffPost Green.” Read by how much here.