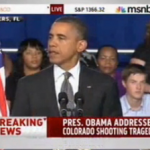 From Mediaite:  Tragedy struck Colorado last night after a masked gunman opened fire at a midnight The Dark Knight Rises screening, killing at least 12 people and injuring 50. Today, President Obama adressed the incident. Reports Mediaite, “During what was supposed to be a Friday morning campaign speech in Fort Myers, Florida, President Barack Obama addressed the late-night Aurora, Colorado theater shooting that has, thus far, claimed 12 lives and injured dozens others. ‘We’re still gathering all the facts about what happened in Aurora, but what we do know is that the police have one suspect in custody, and the federal government stands ready to do whatever is necessary to bring whoever is responsible for this heinous crime to justice,’ the president said to applause… ‘I am so moved by your support,’ he told the crowd of thousands who had hoped to attend a political rally, ‘but there are going to be other days for politics. This, I think, is a day for prayer and reflection.'” Read more about his response here. 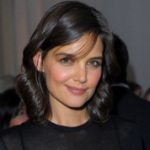 From Gossip Cop: Following her divorce from Tom Cruise, it looks like Katie Holmes really is putting down roots in New York City. After relocating Suri to New York and enrolling her in a private Catholic school there, Katie has taken a gig of her own in the city. Reports Gossip Cop, ” The actress is set make her Broadway return in the family comedy “Dead Accounts” by “Smash” creator Theresa Rebeck. Holmes will star as Lorna, who lives with her elderly parents as she tries to get her life together. Tom Cruise’s soon-to-be ex-wife previously appeared in the 2008 Broadway production of ‘All My Sons.’ ‘Dead Accounts’ opens this fall at the Music Box Theatre.” Read the full story here. 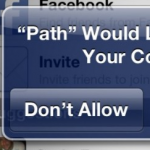 From Geekosystem: The upswing of technology and social media has made all users worry about their privacy. Especially when their data is being mined without their permission. Apple’s iOS6 hopes to fix that. Reports Geekosystem, “The Path iOS app had brought attention to the fact that iOS apps can access user information even if they do not explicitly ask for permission. Apple seeks to remedy this — when an app attempts to access your information, iOS 6 will notify you and ask for your permission. Hopefully, this will give users more control over their data, and make app developers more careful about how they handle user information… Making every single developer modify their apps might get quite difficult, so iOS 6 will just step up to the plate and let you know when your data is being accessed without permission.” Read more about the improvement here. 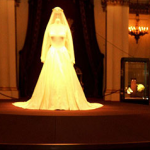 From Styleite: Kate Middleton’s royal wedding dress continues to be one of the most buzzed-about items of clothing on the planet (most recently, it sparked a debate over whether it should have its own Wikipedia page). Today, it is revealed that the dress and its exhibit has raked in ten million pounds for the royal family. Reports Styleite, ‘After Kate wore the Sarah Burton-designed Alexander McQueen wedding gown on her big day, the dress was put in a 73-day exhibit for the public to fawn over. According to the Royal finances, the exhibit, which Queen Elizabeth didn’t like at all, drew 626,678 visitors and made £10 million, or around $15.7 million, in ticket sales. That tidy sum makes up for the measly $54,440 that Prince Charles had spent on Kate’s wardrobe by June many times over. Since the Duke and Duchess’s wedding in April last year, the Royal Household income has risen by £8.5 million, or $13.3 million, thanks to the ‘Kate effect.’ Read the whole article here. 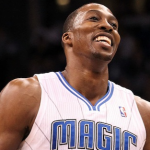 From SportsGrid: More basketball trade news. Today, the “Dwightmare” that won’t end, as Sportsgrid terms it. So where will Dwight Howard go? Reports Sportsgrid, “With rumors swirling that Dwight Howard would sign an extension with the Lakers if he was traded to Los Angeles, Howard’s agent announced that he would not re-sign with any team if dealt, and the all-star center wants to test free agency next summer.Per ESPN: ‘Dwight’s position has remained unchanged since the end of this past season,’ said Dan Fegan of LaGardere Unlimited. ‘He fully intends to explore free agency at the end of next season, regardless of what team trades for him, including Brooklyn.’ Again, this does not mean Howard won’t be traded — it simply means the Magic have way less leverage as they attempt to trade him.” Read more about the Dwight Howard saga here. 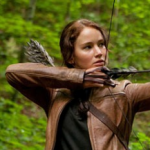 From The Mary Sue: The Hunger Gamesmovie trilogy is attracting a lot of attention for the decisions it’s been making recently, such as casting and possibly splitting the third movie into two parts. Now, its directorial change is in the headlines. Reports The Mary Sue, “Well, Summit certainly knows what it wants, and that is absolutely nothing standing in the way of their Hunger Games release dates. The production company are reportedly on the hunt to replace Catching Fire director Francis Lawrence for the third in the trilogy, seeing as it would be incredibly difficult for Lawrence to finish up his work on the second film in time to start pre-production on the third. ‘Time is money!’ I can hear some Hollywood exec screaming across a conference table as the decision was made.  Other film series have taken this route before: Harry Potter, perhaps most notably (Eight films in ten years would have been a lot of work for one director), and the Twilight Saga.” Read more about their choice here. 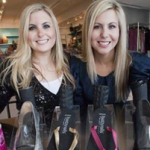 From The Jane Dough: An interview with Jenifer Caplan, one half of a dynamic duo of sisters who are changing the footwear industry — Sarah and Jenifer Caplan. Writes The Jane Dough, “These two women used their financial backgrounds to come up with an idea to end footwear suffering. Their solution is Footzyrolls: the comfortable, fashionable ballet flat that rolls or folds up to fit into your handbag.” So what motivated the idea? “The idea itself hadn’t really existed in the marketplace in terms of compact footwear and shoes you can fit into a handbag — it just wasn’t available when we started three years ago. Our idea, our marketing and everything about Footzyrolls was organically our own. Once you create something and see that people like it and that it can sell, it’s very empowering,” says Jenifer. Read the full interview here. 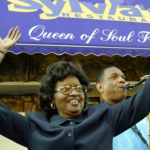 From The Braiser: Sad news today for Harlem and the food world. Sylvia Woods, the owner of the famous Sylvia’s Restaurant, died yesterday at the age of 86. Sylvia’s was a Harlem landmark, drawing crowds from far and wide. Sadly, she passed “only a few hours before she was set to recieve an award from Mayor Bloomberg celebrating the 50th anniversary of the restaurant.” Continues The Braiser, ” Woods originally worked as a waitress in the diner that occupied the restaurant’s location in the 1950s; in 1962, she bought the place, renamed it, and it soon became a New York institution. Her food was so iconic that when she tried to offer lighter, healthier food in the late 1990s, it was ignored in favor of the classics. She worked at Sylvia’s until the age of 80, when she retired… The restaurant was even used as a location in Jungle Fever, Spike Lee’s 1991 film.” Read more about Sylvia and her legacy here.