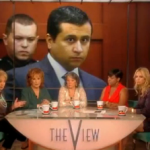 From Mediaite: It was a bizarre morning on The View, after George Zimmerman’s decision to do an interview with FOX’s Sean Hannity and not Barbara Walters. Reports Mediaite, “Walters was scheduled to interview Zimmerman after Sean Hannity did, but when she flew to Florida to do so Zimmerman told her he would not consent to the interview unless she met certain conditions — conditions, Walters said, that she could not meet ‘as an employee of ABC.’ Was it a ‘quid pro quo’ situation, Joy Behar asked? Walters told her ‘I won’t get into it,’ but did say Zimmerman is ‘desperate for money’ and refused to do the interview with her against the advice of his lawyers… That is, until Zimmerman’s lawyer called the show, interrupting the last ten minutes, telling Barbara that Zimmerman was willing to do the interview. From her perch on the couch Barbara shut them down, saying pointedly ‘We will now continue with our program.'” You tell ’em, Barbara. Read more here. 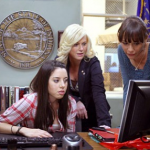 From Gossip Cop: The big news in the entertainment world today is the release of the 2012 Emmy nominations. As always, there are leaders and there are snubs, and Gossip Cop is reporting on them both for you. Reports Sportsgrid, “The 2012 Primetime Emmy Awards nominations were announced on Thursday morning, with ‘American Horror Story’ and ‘Mad Men’ leading the way at 17 nods apiece. But who was snubbed? Plenty of longtime favorites like ‘House’ star Hugh Laurie, ‘Survivor’ host Jeff Probst, ‘Parks and Recreation’ actor Nick Offerman, and John Slattery of ‘Mad Men’ were left off the nominations list, as were critically beloved shows like ‘Louie,’ ‘The Good Wife’ and ‘Community.'” Gossip Cop has a full gallery of those shows are performers many feel were unfairly left out. Check it out here. 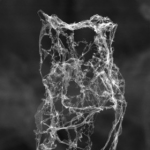 From Geekosystem: Scientists have made a new discovery: aerographite. Why it matters: it’s the lightest material on the planet! Reports Geekosystem, “Scientists at Kiel University and Hamburg University of Technology jointly created the material, which has a staggeringly low density of .02 milligrams per cubic centimeter, blowing away previous record-holder aerogel which, at its best, had come in at around .1 milligrams per cubic centimeter. That, of course, doesn’t give you any real feel for how light this stuff actually is in a practical sense, so how about this: Aerographite is 75 times lighter than your average Styrofoam, 5,000 times less dense than water, and actually 6 times lighter than air… the whole reason aerographite can manage to have such a low density (and therefore a low weight) is because it is so ridiculously porous. As a result, it’s pretty much ‘soaked’ with air all the time.” Read more about the new material here. 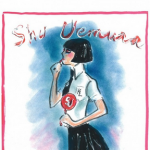 From Styleite: Fashion designers can draw inspiration from anywhere, and in the latest genius idea,  Karl Lagerfeld is drawing from anime. He is collaborating with Japanese makeup brand Shu Uemura on a cartoon-y holiday collection set to hit shelves this October. Reports Styleite, “Karl has been using Shu Uemura’s eyeshadows to color his sketches for decades. ‘It’s better than pastel; nobody has colors like that,’ the designer told WWD. Because he’s always using their hues, Karl created a character for the brand called Mon Shu (a play on the phrase ‘mon chou,’ which means ‘my dear’ in French) — a girl with a black bob and red eyes, dressed much like Lagerfeld himself in a high-collared white shirt and black tie — whose likeness is all over the collection… The line includes 17 pieces: two eye-and-cheek palettes, three nail shades, four lip colors, makeup remover, purple liquid eyeliner, base mousse, two pairs of false lashes, and various tools.” Read more about the collaboration and see photos here. 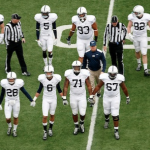 From SportsGrid: What is the future of Penn State’s football program in the wake of the Sandusky trial and Freeh report? Reports Sportsgrid, ” As Penn State continues to deal with the fallout of the Freeh Report, news came out today that the school could potentially lose its seat in the Big Ten Athletic Conference. According to The Chronicle of Higher Education, the conference’s powers-that-be are beginning what will most likely be a lengthy discussion on their future with the Nittany Lions: “Big Ten officials are still in the early stages of debating how to handle fallout from the scandal. Among other ideas, the league’s presidents and chancellors could consider removing Penn State from the conference, one Big Ten leader told The Chronicle.” There is still a possibility that Penn State’s football program could receive the death penalty, according to NCAA president Mark Emmert.” Read more about the decision here. 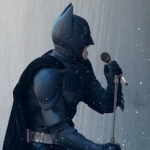 From The Mary Sue: The Dark Knight Rises opens tonight, and that’s a big deal. Such a big deal, that tickets for it are being scalped like it’s a rock concert. Reports The Mary Sue, “According to The Wall Street Journal, tickets to sold-out midnight IMAX screenings of The Dark Knight are going for $65 to $100 on Craigslist and StubHub, a markup usually only reserved for one-time-only viewings like sports events and concerts. Yes, yes, in a way, there’s only going to be one midnight release of The Dark Knight Rises. But then it’s going to be playing in a billion theaters for a billion days. I’m not here to denigrate the enthusiasm that would cause a person to spending between three and five times the normal ticket price for a movie, but I am here to say ‘Wow, The Dark Knight Rises. Wow.'” Read more about opening night projections here. 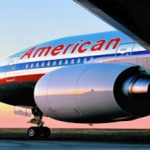 From The Jane Dough: There’s been a lot of news surrounding women at the Olympics (see: Saudi Arabia allowing them to compete, U.S.A. sending more females than males.) It continues today, with Japan’s favoring of their male team. Reports The Jane Dough, the “women’s soccer team from Japan was assigned economy airline seats to this year’s Olympic games. What’s so bad about coach? Apparently Japan’s men’s soccer team got business-class seats. Awkward… [I]t’s up to each individual sport’s governing body to decide whether it would like to upgrade its athlete’s tickets. In this case, the Japan Football Association decided to upgrade its men’s tickets, but not its women’s. This is made all the worse when one considers the female soccer squad’s outlook at the Olympics, compared to the men’s squad’s relatively low expectations.” Read more about the incident here. 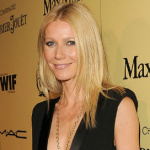 From The Braiser: Will celebrity foodie Gwenyth Paltrow play celebrity chef Gabrielle Hamilton? Reports The Braiser, “Gwyneth is reportedly in talks to play the chef and writer in an upcoming big-screen adaptation of Gabrielle’s memoirBlood, Bones and Butter: The Inadvertent Education of a Reluctant Chef. The film, which is being pitched as a film ‘in a similar vein as Julie & Julia,’ doesn’t yet have a writer, but will be produced by the people behind Adventureland and Junebug. Gabrielle’s memoir has won awards and the adoration of critics and fans alike, and can be described as ‘gospel for a lot of aspiring food writers.’ Maybe Gwyneth is hoping that by playing one of the most renowned chefs in the country, the food community will finally accept her as one of their own. And as long as she isn’t trying to be a country singer again, we’ll get behind her. Deal, Gwyneth?” Read more about the project and The Braiser’s opinion here.