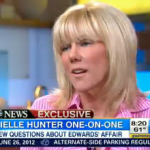 From Mediaite: Rielle Hunter appeared on ABC’s Good Mornina America to give a rather uncomfortable interview, in which she revealed that she and John Edwards are no longer an item. With host George Stephanopoulos she discussed their relationship, as well as her new book. Reports Mediaite, “Rielle Hunter revealed… that, as of last week, she and former presidential candidate John Edwards are no longer a couple. Hunter also struggled to answer the serious criticisms of her new ‘tell-all’ book, mainly the fact that she describes Edwards’ late wife Elizabeth in largely negative terms. Stephanopoulos began by asking Hunter whether she’d still have begun the affair knowing what transpired after the six years that followed. ‘Would I do that again? No way,’ she said. ‘Absolutely not.’ Astonished at the fact that this could imply she would give up her daughter by Edwards, Stephanopoulos asked, ‘So, in the end, even though you got this lovely gift, Quinn, the relationship was a mistake?’ ‘Many things in the relationship were a mistake. But I don’t regret loving him,’ Hunter responded, not quite answering the actual question.” Watch and read more about the awkward here. 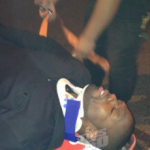 From Gossip Cop: 50 Cent has been injured in a car accident. On Monday night, a truck rear-ended his SUV on the Long Island Expressway in New York, and he wound up in the hospital. Reports Gossip Cop, “The rapper was put on a stretcher and taken to a medical facility in Queens following the collision. A rep for 50 Cent released a statement saying, ‘He was taken to New York Hospital Queens where he was treated for minor neck and back injuries. He was released this morning and is doing fine.’ The truck driver, who was also treated, told police his load shifted and he lost control of the vehicle.” This is the second recent hospitalization for the rapper, who tweeted about mystery surgery mid-May. Read more and see photos here. 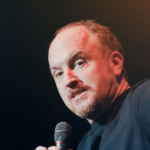 From Geekosystem: It’s no secret that ticket-selling entities like Ticketmaster have gotten more ridiculous over the years, angering fans. Absurd and hidden fees, as well as complicated buying processes, are typical. What’s atypical, however, is seeing a celebrity go out of his way to do something about that. Louis C.K. has always been known for trying to bring his fan the best direct deals, and with his latest tour, he’s doing the same. Reports Geekosystem, ” In an email sent out to fans last night, C.K. announced that tickets to his upcoming tour would be sold to fans directly from him. The effort, he writes, is to remove companies like TicketMaster which charge hefty fees for the “privilege” of using their service. In doing so, C.K. says that he can offer tickets to his fans at a much lower rate. It also means that he’ll get 100% of whatever’s left after the venues take their cut. Amazingly, he’s able to offer every single seat at every single show for the same price. $45 will get you in wherever he’ll be playing, and it’s the same price whether you are front and center, or stuck on Mount NoseBleed. It even includes sales tax, which C.K. will eat on your behalf.” Read the full story here. 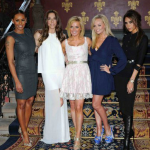 From Styleite: Well, twenty-something girls everywhere are very happy today after the announcement that a Spice Girls musical (yes, that’s right) is in production. Reports Styleite, “It’s called Viva Forever! (exclamation point included), was written by Absolutely Fabulous‘s Jennifer Saunders, and is being produced by Mamma Mia!‘s Judy Cramer. Here is the synopsis, as per the musical’s website: ‘As one girl follows her dreams, VIVA FOREVER! charts her journey into the world of overnight celebrity and its impact on her mother, and the friends she thought she’d have forever. From London to Spain and back again, as the world judges you, it’s all about who you really are and who you want to be, whatever the cost. Spice up your life with this exhilarating and irresistibly funny tale of love, loyalty and romance. An original story of our times, inspired by the songs of the Spice Girls, VIVA FOREVER! hits all the high notes for a fabulous feel-good night out.’ It will open Nov. 27 in London, and we really hope it makes its way stateside.”  Read more here. 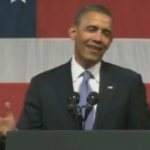 From SportsGrid: Uh oh. Obama might have made a mistake, or at least had a “too soon” moment, when speaking to a room in Boston full of Red Sox fans. Reports Sportsgrid, “As you might know, Kevin Youkilis switched Sox recently, heading from the Red Sox – with whom he’d spent his entire major league career – to the White Sox. Youkilis was off to a slow start this season, and his numbers last year, while still solid overall, represented a significant dropoff from his 2008-2010 level. Still, though, he played a lot of excellent baseball for the Red Sox, and was a part of two championship teams (and an everyday starter on one of them). For a fanbase with no title in 86 years before 2004, that was no small thing. He was a cornerstone of what’s been, prior to September of last year, a pretty damn glorious run for Boston, and its fans are sad to see him go. So if you’re a White Sox fan, tread lightly when needling Red Sox fans about the deal. And if you’re a White Sox fan speaking to a room full of Red Sox fans – fans whose support you need for an important purpose – tread very lightly.” Which Obama did not – making a Youkilis joke that led to some booing. Watch a video of the incident here. 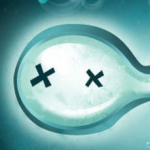 From The Mary Sue: Are male contraceptives on their way? After a long spring of reproductive rights political controversies, what if birth control wasn’t mostly just for women? Reports The Mary Sue, “Thanks to an innovative birth control method involving a gel that is applied directly onto men’s skin, reliable male contraceptives may not be a pipe dream any longer. Researchers at the Los Angeles Biomedical Research Institute at Harbor-UCLA Medical Center have developed a groundbreaking contraceptive gel that combines testosterone with a new synthetic progestin called Nestorone . When applied on the skin, the gel reduces the sperm production of the user dramatically – 89% of men who used the product experienced a reduced sperm count. Here’s how it works: testosterone can inhibit the production of reproductive hormones and when it is combined with progestin, that effect is multiplied, effectively preventing the body from producing sperm. Additionally, the drug benefits from using a synthetic progestin  – Neostrone results in no wacky hormonal activity, preventing users from facing the pubescent horrors of zits all over again. The gel also doesn’t impact cholesterol, another concern that arises with the use of progestins.” The product is currently far from perfect, but read more about it here. 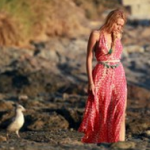 From The Jane Dough: Another young actress is pointing out the lack of women in Hollywood. This time, Blake Lively. Reports The Jane Dough, “The ‘Savages’ actress, who portrays a troubled young woman dating two pot dealers in the upcoming film, orchestrated some ‘revisions’ and ‘rethinking’ of her role to fully understand the part she undertook and better portray a 20-year-old girl. Lively… is a lot different from onscreen character O, who is kidnapped after her marijuana dealing boyfriends refuse to collaborate with the Mexican drug cartel. Though unable to relate to O’s path, Lively got to know her part well and told the LA Times magazine that the author of the book on which ‘Savages’ is based and male screenplay writer didn’t exactly have a ton of insight into her character… Props to Lively for acknowledging that fact, holding her own, and reminding us that female screenwriters are few and far between. Rather than submit to director Oliver Stone’s initial image of O, Lively worked with him until “[she] said, ‘This is a girl I can understand’… Stone has said more than once that Lively was a bit of a “challenge” and was heavily challenged by ‘Savages,’ but she brought her personal experience as a young female to the project–something the men behind the script couldn’t do.” Read more here. 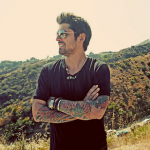 From The Braiser: The recent foie gras ban has upset the culinary world, and come next Sunday, it will take effect in California. However, hold on, Californians – you may be in luck. Reports The Braiser, “Though you may have been intimidated by crowds of feral animal rights activists, there are chefs, like Ludo Lefebvre, who will bravely skirt the law — by serving it for free. ‘If I don’t charge for it, it’s not a crime,’ Lefebvre, the owner of the pop-up restaurant LudoBites, said in a interview with Bloomberg News. ‘And so I’m going to do it.’ Surprisingly, even though the law passed through the legislature and shut down businesses that served delicious duck livers, there’s not much of an interest among California law enforcement to actually enforce the ban. Though chefs found selling foie in their restaurants face a fine of $1,000 per violation, that’s dependent upon chefs actually selling foie gras from their kitchens. Loophole! Given this leniency, it’s no surprise that Lefebvre, as well as many other chefs in California, are finding creative ways to bypass the law: many, such as Mark Pastore of San Francisco’s Incanto, are pondering a ‘foie-kage fee,’ charging people money to bring in their own foie gras to be cooked by the restaurant. Or they’ll just cook foie that customers bring in, for free.” Read more about the ban here.