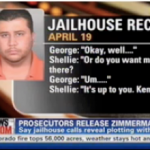 From Mediaite: The Trayvon Martin case continues. A few weeks ago, George Zimmerman, the man arrested for the shooting of Florida teen Trayvon Martin, had his bond revoked by the judge and ordered to surrender within forty-eight hours. Now, prosecutors have released new tapes of Zimmerman speaking to his wife while under arrest before release on bail, which claim to show Zimmerman was trying to hide thousands of dollars in legal funds from the court. Reports Medaite, “Zimmerman, who returned to custody after the financial discrepancies were found, can be heard speaking in what prosecutors argue is code to tell his wife to hide the money. Shellie Zimmerman was arrested earlier this month for perjury, and these tapes are the prosecution’s prove, allegedly, that she and her husband were planning on hiding money from the legal fund to which their supporters donated… As the discovery continues, one can expect that more tapes will come out, though six are currently available and in the process of being mined for information.” Read more and listen to the tape’s audio here. 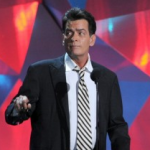 From Gossip Cop: Will the Charlie Sheen saga soon be over? Is he headed for retirement? Reports Gossip Cop, “The actor says his upcoming FX show, ‘Anger Management,’ will be his ‘swan song.’ ‘I’ve been doing this 30 years. And there’s a lot more out there to do than make-believe, you know?’ Sheen tells The New York Times. While it’s always possible Sheen will change his mind, the actor says he’s looking forward to just focusing on ‘soccer games and amusement parks’ with his kids.  Sheen, who says he refuses to take drug tests for his new employers, claims his bosses know it’s ‘not always going to be smooth sailing’ with him, and that he refuses to ‘grow up.’ ‘I don’t believe in failure, fatigue or excuses. I don’t believe in them,’ he says.” Read the full article here. 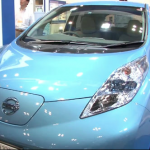 From Geekosystem: The future is here. To some, this means access to semi-affordable electric cars and computers that fit into our pockets. To others, it means the potential for endless innovation. Another step towards this innovation has been taken with the release of a new charging station for the all-electric Nissan Leaf car. Reports Geekosystem,
“The Japanese company Nichicon debuted the charging station late last month, and has been showing it off at tradeshows. Called the Vehicle to Home EV Power Station, the air conditioner sized device can charge a Nissan Leaf to 80% capacity in about 4 hours — or about twice the speed of a conventional charger. However, the really neat thing about the Nichicon charger is that it is the first commercially available charger built with Nissan’s Leaf to Home technology. In short, it allows power to flow in both directions so that the house can power the car and the car can also power the house. This unique capability has two main uses. The first is that in an emergency situation, the car can be used as a power source for the home… More interesting is the charger’s ability to keep the Leaf connected to the power grid as a power source.” Read more, as well as see photo/video, here. 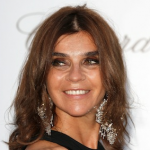 From Styleite: Shots have been fired in a new Condé Nast war. Carine Roitfeld, former French Vogue editor-in-chief (from 2001-2011), is now launching her own magazine, and Conde is warning photographers not to work with her, “lest they incur the magazine giant’s wrath.” Reports Styleite, “Roitfeld plans to launch her own magazine called CR Fashion Book in September, and Page Six reports that Condé’s international chairman Jonathan Newhouse has been sending not-so-friendly reminders to fashion photographers like Mario Testino and Marcus Piggott and Mert Alas to make sure they don’t stray from their contracts, which bind them to shoot for Condé Nast titles only.But the obstacles facing Roitfeld don’t stop there. An anonymous source told the Post that even photographers who don’t have contracts barring them from working for anyone but Condé are scared to work with her: ‘People love Carine, but are more frightened of the Condé Nast machine.’ Hopefully Roitfeld can find a way around these roadblocks, because we want to see what CR has in store!” Read the whole story here. 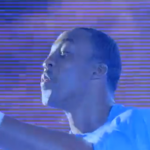 From SportsGrid: The NBA season may be coming to a close, but fear not, basketball lovers – your favorite players have a new project in the works. It seems as if Carmelo Anthony, Dwight Howard, and Scottie Pippen have a new project together: starring in a major Chinese motion picture. Yes, that’s right. The movie is titled Amazing and is slated for release this summer, in China. Writes Sportsgrid’s Matt Rudnitsky, “After some serious Googling, I’ve determined that Magic Johnson, Yao Ming and Yi Jianlan also make appearances. Here’s a synopsis, Google-translated, via some website that seems like Chinese Rotten Tomatoes: ‘The movie … is intended to show a few urban white-collar basketball fans realized the truth of life in basketball the face of temptations. The hero of the film played by Huang Xiaoming is a game tester, testing a new virtual reality basketball game, this virtual world is not so simple, even accidentally involved in some thrilling adventure.’ There’s a bit more, even less comprehensible. From what I can gather, the protagonist plays a virtual reality basketball game against NBA stars, there is a grave conflict and there is a love story. It’s like Chinese Space Jam, but for adults, I think. There are NBA stars. There’s sex appeal. This movie will sell.” Watch the trailer and read more of Matt’s predictions here. 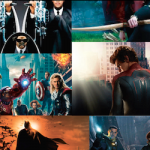 From The Mary Sue:  Film studios: take note. There’s some new ideas about how to make the most money off of a movie, and recent social media growth has a lot to do with it. Reports The Mary Sue, “A study led by Akira Ishii on the release of twenty five different movies to theaters in Japan seems to say that while advertising can help, the only direct indicator of a movie’s success isn’t how much money is spent on advertising, or even how well the campaign is pulled off. It’s the online social media buzz surrounding the movie. Which on the face of things seems pretty obvious: people talking publicly about a movie directly correlates to people going to see a movie, probably because they saw that movie and wanted to talk about it. The more interesting information for studios, I think, is that the money spent on an ad campaign isn’t as important as the timing of the campaign, and that embracing the online community’s ability to create social buzz might do them better overall.” Read the full story here. 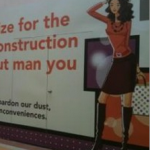 From The Jane Dough: Last week, The Jane Dough’s Laura Donovan wrote a piece about the unwanted harassment of catcalling, and the new Hollaback! movement against it. Unfortunately, the movement still has a long way to go based on one sign recently spotted in New Jersey. Posted by E. Allen Reeves Construction Company at a New Jersey mall, the sign reads “We apologize for the whistling construction workers, but man you look good! So will we soon, please pardon our dust, dirt, and assorted inconveniences.” Writes Donovan, “You know what actually seems worse than a classless construction worker asking an innocent passerby to take off her clothes and perform fellatio on him in the middle of the street? A sign justifying such sexual harassment by the fact that the female victim is simply too hot not to be objectified or bothered. Sadly, this sign exists… Naturally, some are up in arms about it and protesting the ridiculous sign that makes light of catcalling and sexual harassment.” See a photo of the sign and read more here. 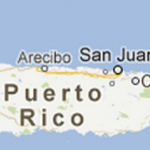 From The Braiser: Some changes for the James Beard Foundation, and some hope for Puerto Rico. Reports The Braiser, “It may be a while before Puerto Rico achieves statehood, but for now, being allowed to compete for James Beard Awards is a fair consolation prize. Good news for chefs like Wilo Benet and José Santaella, but bad news for all the celebrity chefs of poor, neglected Guam. The James Beard Foundation announced today that they were redistricting the regions eligible for the James Beard Awards, and their gerrymandering led to two major changes: not only will chefs from Puerto Rico be able to compete against Louisiana, Florida, Alabama, Mississippi and Arkansas for ‘Best Chef South’ (as well as be eligible for other national awards), Nevada is no longer considered part of the Southwest.  Instead, Nevada, with all their fancy chefs and casino money, will compete against California and Hawaii in the new ‘Best Chef West’ category.” Read the article here.