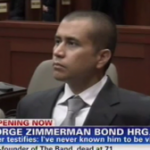 From Mediaite: More developments in the Trayvon Martin case. A Florida judge has revoked the bond of George Zimmerman, charged with second-degree murder of Trayvon Martin, and asks that he turn himself in within 48 hours. Reports Mediaite, “The state maintains that there are two factors contributing to the decision: 1) Zimmerman only turned in one of his two passports, and 2) Zimmerman had accumulated, via online fundraising efforts, more money than he had initially disclosed. The prosecution made sure to point out jailhouse phone conversations between Zimmerman and his wife suggesting that they knew exactly how much money they really had prior to statements they had made during his bond hearing.” Read the full story here. 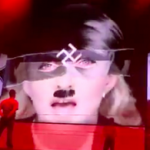 From Gossip Cop: Madonna is causing controversy again. Reports Gossip Cop, “Madonna used Nazi imagery, including swastikas and Adolf Hitler, during a video interlude at her concert in Israel on Thursday. The visuals were among a series of symbols, photos and clips projected on screens to accompany the singer’s song ‘Nobody Knows Me.’ At one moment in the montage, Madonna is wearing Hitler’s mustache and a swastika on her forehead. Also seen are the Iron Crosses used in Nazi Germany. The Nazi section comes amid a flurry of other images of violence, war, political protests, and other highly-charged visuals. However, the decision to put Nazi imagery — on giant screens – in Israel is sparking controversy, with many commentators saying it should  not have been included, regardless of the context or message.” Watch the performance and read more here. 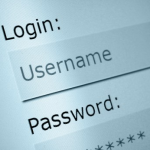 From Geekosystem: It turns out older people are better technology users in regards to some things, specifically, passwords. Reports Geekosystem, “According to a new study of almost 70 million Yahoo! users, users over 55 are way more likely to have a secure password than users under 25. It’s not by a small margin either, as far as the comparative strengths go. The passwords those over 55 tend to use are generally twice as strong as those from their younger counterparts. That doesn’t necessarily mean the better passwords are longer or anything, though, it probably means they’re just more randomized (read: not ‘123456’). This study is particularly notable because it examined active passwords legitimately obtained. Joseph Bonneau, the University of Cambridge computer scientist who conducted the study, was able to examine the passwords without jeopardizing anyone’s security because the passwords were all hashed, and researching in-use passwords gave the study a new angle on the subject. Of course, one of the reasons for this is that older users are probably more likely to have a larger number of valuable things to protect, like access to bank accounts or credit cards. These accounts tend to require special characters, numbers or camel-case as well. Your average 15-year-old probably has little more than social networking accounts at stake, and although that information can be valuable, it’s not money.” Read more, and about other password correlations, here. 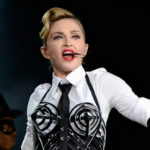 From Styleite: More Madonna news. This time, not controversy but cones. The cone bra is back.  Reports Styleite, “The more things change, the more things stay the same. This time, Madonna, the queen of reinvention, kicked off her worldwide MDNA tour with a throwback to 1990′s iconic Blonde Ambition cone bra corset, designed by Jean Paul Gaultier. 22 years after its inception, Madonna wore the contraption over a crisp white button down and high-waisted pants for a thoroughly modern take.” See pictures of the cone-bra comeback (also in Israel), as well as pictures of Madonna’s fashion over the years, and read more here. 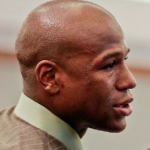 From Sportsgrid: Floyd Mayweather went to jail today. Reports Sportsgrid, “June is finally upon us. The sun is out. The Stanley Cup and NBA Champion will soon be decided. Floyd Mayweather Jr.’s jail sentence has begun. Money May began serving an 87-day jail sentence today for the domestic battery of Josie Harris, the mother of Mayweather’s two children. He’s not the first (and will probably not be the last) high-profile sports figure to land himself in jail.” See ten other high-profile athletes who landed in jail here.

From The Mary Sue: Two impossibly cool things combined: space and The Avengers. That’s right, the International Space Station crew gets a private screening of the movie… in space! Reports The Mary Sue, “Marvel announced today they’d be uplinking The Avengers film to the ISS through NASA’s Mission Control in Houston. ‘This screening continues Marvel’s collaboration with NASA, which began during principal photography of Marvel’s The Avengers when the film shot at the Space Power Facility at NASA’s Plum Brook Station in Sandusky, Ohio,’ according to the press release. ‘These are the types of things that help to keep the crew connected to home, which is a huge morale boost while being away for long periods of time,’ said Dan Cook, Psychological Support Coordinator with Wyle, a contractor at NASA’s Johnson Space Center. The ISS is orbiting 220 miles above Earth and currently has a crew of six including two NASA Astronauts, one European Space Agency Astronaut, and three Russian Cosmonauts.” Read more about it here. 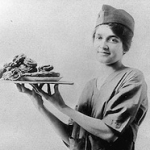 From The Jane Dough: Happy National Donut Day! It turns out this celebration is not only of sweets, but also of feminism. Yes, National Donut Day may exist thanks to women. Reports The Jane Dough, “Donuts have been floating around North America since colonial times, Wentz explained, when the Dutch called them ‘oily cakes.’…It wasn’t until the mid-1800s when New Englander Elizabeth Gregory gave oily cakes the rebranding they so desperately needed, Wentz explains, when she whipped up a repurposed batch for her seafaring son and his crew. She chocked the things full of spices and — yep — nuts, to help ward of scurvy. (Remember, stuffing your face with donuts? Not gluttonous. You’re fighting off scurvy.) And, because of the nuts (and the dough), she called them “doughnuts.” But wait, there’s more! Turns out the entire concept of a “National Donut Day” is actually in honor of women. (Stay with me here.) During WWI, female volunteers baked up donuts and handed them out to soldiers on the front lines, according to a comprehensive history of the holiday from the SF Gate. The women, volunteers with the Salvation Army, were known as “Doughgirls” or, according to The Salvation Army, “Donut Lassies.” I like the second one better.” Read more about the holiday, as well as a good list of doughnut puns, here. 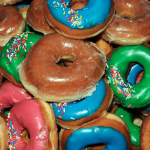 From The Braiser: A continuation of the National Doughnut Day celebration, this time exploring chefs’ contended relationships with the treat. Reports The Braiser, Celebrity chefs really like gourmet-ifying other classic American staple desserts, like pies, cupcakes, and whoopee pies (which is basically the love child of pies and cupcakes). But few have tackled the doughnut.” Why? The Braiser notes that chefs usually choose to call “whatever deep-fried dough thing they put on their menu” a beignet, the  New Orleans pastry that is “far more delicate and artisanal” and also French. The Braiser speculates that “maybe the doughnut is associated with the worst, unhealthiest aspects of American cuisine?” Find out more about chefs and doughnuts, as well as a slideshow of examples of the relationship, here.