From Mediaite: Uh oh, politicians – your deleted tweets may surface. Talk about trouble. Politwoops is a new website that will chronicle all the deleted tweets of political leaders, from their official Twitter accounts. Besides the potential for unearthed disaster, it also gives credence to the idea that information you post online will be around forever. Reports Mediaite, “The types of tweets deleted range from amusing to potentially provocative. One example is Rep. Stephen Fincher (R-TN) comparing The Bachelor to The Hunger Games. On a more political note, there’s Rep. Jeff Miller (R-FL) who, on May 18, tweeted a link to a Facebook poll asking, ‘Was Obama born in the United States?’ Obama’s account, too, has deleted tweets, including links to articles and a few retweets. Politwoops currently includes more than 3,000 deleted tweets and counting — from the past six months. This should be fun.” Fun, indeed. Read more about it here. 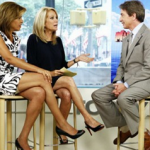 From Gossip Cop: A second gaffe for Gifford. Kathie Lee yesterday created a fairly awkward moment yesterday on her hour of The Today Show when she asked Martin Short about his wife, Nancy Dolman, claiming how in love they are. Awkward because his wife died two years ago of ovarian cancer. Even worse when she obvliously continued to chat about them after he mentioned that. Short handled it gracefully, and she apologized following a commercial break, but Gifford still owed him an extended apology. Enter gaffe two. Reports Gossip Cop, “She wrote, ‘I send my sincerest apologies to @MartinShort and his family. He handled situation w/enormous grace and kindness and I’m so grateful.’ The sentiments are nice… except that’s not Martin Short’s Twitter. Oops. Not a great day for Gifford’s fact-checkers.” Watch the original mistake here, and read about today’s misinformed tweet here. 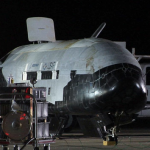 From Geekosystem: Is there anything cooler than secret spaceships? “After having spent over a year in space, the United States Air Force’s secret X-37B spacecraft will be coming in for a landing sometime in the next few weeks. The miniature spaceplane, which looks like a 30 foot long Space Shuttle with angled fins and a bulbous rear end, has apparently performed exceedingly well in its mission — except what that mission is remains a secret,” writes Geekosystem. The spacecraft launched mid-March of this year, and is expected to land at Vandenberg Air Force Base in California by mid-June. Its mission is unknown (all anyone has said about this mission is that it was meant to test “space technologies”) but speculations have arisen, including that the spaceplane is being used to develop orbital weapons (which the Pentagon has denied) and that it was being used to spy on China’s Tiangong-1 space station (also refuted). It’s possible that the craft is still being tested, though it seems to work well already. We may never find out. Read more about the spacecraft here. 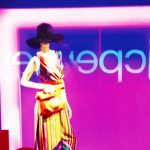 From Styleite: A lawsuit for J.C. Penney. Reports Styleite, “New York-based design firm Hudson + Broad filed a $40 million lawsuit against J.C. Penney last month for allegedly breaching a contract. Now, the retailer is asking Manhattan’s U.S. District Court to dismiss the case. The backstory: J.C. Penney commissioned Hudson + Broad to design a unique LED fixture for their stores. If the design was approved, J.C. Penney would place an order for production and not give the design to a cheaper manufacturer. The design was approved, but the retailer allegedly gave it to another manufacturer, which means Hudson + Broad got peeved.” J.C. Penney has until July 27th to respond to the lawsuit before the case goes to a judge. However, Hudson + Broad is fighting proactively, releasing Youtube videos against the retailer. Watch those videos and read more here. 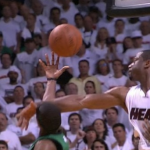 From Sportsgrid: There were a lot of sports on television last night. One of the most talked about though, was Game 2 of Heat v Celtics, especially the Dwyane Wade-Rajon Rondo No-Call. To fill you in: “The Heat took a 2-0 Eastern Conference Finals lead over the Celtics last night with a 115-111 overtime win, but not unlike the [NBA] draft lottery earlier in the night, the game ended amid controversy. And the lion’s share of that controversy centered around one call (or more accurately, lack thereof) during overtime, with the game tied at 105. Rajon Rondo – who played the game of his life, playing all 53 minutes and scoring a career-high 44 points along with eight rebounds, 10 assists, and three steals – drove to the basket. Dwyane Wade got a hand in his face. Rondo contended that Wade got a hand on his face, but no call was made. ESPN’s announcing team, upon looking at replays, thought it was a huge missed call. Rondo certainly thought it was a huge missed call,” reports Sportsgrid. Many others thought it was a missed call, too, so Sportsgrid has rounded up the best angry reactions to it. See them all here. 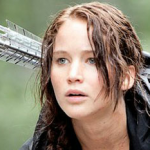 From The Mary Sue:  Is MTV making an important statement with one of their MTV Movie Award categories? Now, both men and women are nominated in the best hero category. Reports The Mary Sue, “Jennifer Lawrence’s Katniss [is] up for ‘Best Hero’ at this year’s MTV Movie Awards. Yes, Best Hero, not Best Female Hero, not Best Heroine. Interesting… Could MTV be trying to make some sort of statement by having both men and women in the category? Odds are, no. It may just simply be that they don’t have enough entries to warrant creating a separate category. The Oscars still have only one category for their Best Director award, yet have Best Male and Female Actor categories. Yes, there are many women directors out there but maybe not enough doing Oscar caliber work.” This year, the category is a live social voting category, so cast your vote. Read more here. 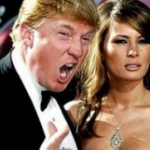 From The Jane Dough: Recently, President Obama gave a college commencement speech that chronicled what he’s learned from the women in his life. Today, The Jane Dough explores what another presidential hopeful (sort-of), Donald Trump, could learn from the women in his. Reports The Jane Dough, “his morning, his wife Melania appeared on “Fox and Friends” to promote her jewelry line, and during the visit, she addressed her husband’s inexplicable witch hunt on President Barack Obama, whom Trump still seems to believe was born in Kenya and is not, in fact, an American citizen. Melania would like everyone to “agree to disagree” on this issue, and while we think she should have simply called her spouse out on his sheer ridiculousness, she didn’t spew the kind of nonsensical bile that he has on countless occasions, so we like the way she presents herself. Trump’s daughters seem fairly well adjusted too, so here is what he can learn from the poised women he has in his life.” See the slideshow here. 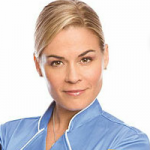 From The Braiser: A celebrity chef is exploring new territory – beauty pageants. It has been announced that Cat Cora, restauranteur, television personality, Bravo host, and mom of four, will join the judges’ panel for this year’s Miss America contest. “The former Iron Chef  joins some other craaaaaazy characters on the judges’ panel, including Joe Jonas, Arsenio Hall, former Bachelorette Ali Fedotowsky, and some Rob Kardashian sock puppet person  — and they’ll all get together and ask young women questions about maps and changing the world when the pageant airs live on June 3rd on NBC. Cora will appear on the show with hosts Andy Cohen and Giuliana Rancic, fashion commentator Kelly Osbourne, and performers Cobra Starship and Akon.” This marks the first time a celebrity chef has judged a beauty pageant of this prominence. Read more about it here.