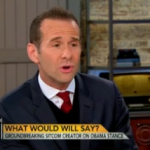 From Mediaite: On the heels of President Barack Obama‘s announcement that he supports same-sex marriage, Will and Grace co-creator Max Mutchnick reveals that Vice President Joe Biden had tested his own remarks on gay marriage earlier. Mutchnick explained on CBS This Morning that Biden’s lengthy mention of his sitcom during the Vice President’s Meet the Press remarks was no mere coincidence. Read what he describes here. 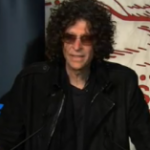 From Gossip Cop: Howard Stern weighed in on Britney Spears reportedly joining “The X Factor” as a new judge during an “America’s Got Talent” press conference on in New York on Thursday. The self-described King of All Media says, “Well, I think it’s a wonderful decision, you know, Britney still thinks the earth is flat.” Watch the video of him here. 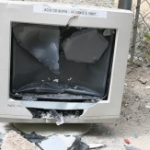 From Geekosystem: 21-year-old Kamil Mezalka is faced with federal charges of downloading child pornography, and could face a minimum of five or up to twenty years in prison if convicted. On Tuesday, law enforcement obtained a warrant and raided the man’s house after no one answered the door. Once the agents entered the house, Mezalka came out of a bedroom on the second floor with his hands up, but then quickly returned to the bedroom and closed the door. Agents followed him into the bedroom, and upon entering, saw that he was in his underwear and witnessed him stab his computer with a samurai sword, obviously quite aware of what the raid was about. Read the full post here. 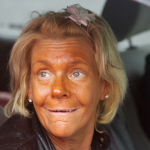 From Styleite: ‘Tan Mom’ Patricia Krentcil has now been banned from eight Planet Sun Tanning Salon locations in New Jersey. She was arrestedearlier this month for allegedly bringing her 6-year-old daughter Anna into a tanning booth. According to the New York Daily News, employees confirmed the ban and photos of Krentcil are posted on the salon walls for reference. However, Krentcil doesn’t seem to care: “I haven’t tanned since all this happened. I’m not banned from anything. I didn’t go. I don’t need to go.” Read the full post here. 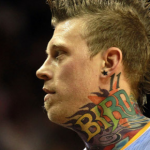 From SportsGrid: Earlier this morning, police executed a search warrant at the home of Denver Nuggets center Chris “Birdman” Andersen, the Denver Post reports. According to the Douglas County Sheriff’s Office, the warrant is in relation to an ongoing investigation by the Internet Crimes Against Children division. Andersen, who was at Denver’s shootaround this morning in preparation for Game 6 against the Lakers, has not been arrested and there is no word on forthcoming charges. A spokeswoman from the sheriff’s office declined to comment on the specifics of what property was seized from the house, but did note that Andersen cooperated fully with the warrant. Read the full post and follow the story here. 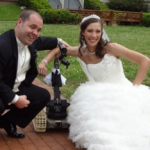 From The Mary Sue: Most people choose adorable/annoying relatives to act as ring bearer or flower girl at their nuptials but not Laura Cressman. Oh no, this particular bride-to-be settled for nothing less than a bomb disposal robot. Yup. Laura’s father, William Wong, was so excited about her choice he decided to document the happenings on Electronic Design. He writes, “Laura works for Qinetiq as a mechanical engineer and designed the robotic arm on the Dragon Runner unmanned ground vehicle (UGV).” Read the full post here. 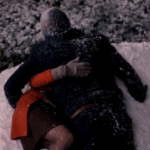 From the Jane Dough: In a perfect world, we could all have sex any time we pleased. But duringthe week, it can be rather hard to concentrate on things besides basic responsibilities, so it makes sense that a new survey reveals that women are friskiest at 11 p.m. on Saturday nights. Wonder why? Read on here.