From Mediaite: On Monday, Morning Joe’s Mike Brzezinkski weighed in on GOP presidential hopeful Mitt Romney‘s recent economic speech at a mostly-empty Ford Field stadium in Detroit, Michigan by opining that “there’s something wrong with his people.” Referring to the fact that Romney addressed roughly 1,000 people in a 70,000 person venue, Brzezinkski and her guests ruminate on the idea that if you can’t run your campaign well enough to ensure embarrassing mistakes like an empty audience don’t happen, what does that say about your competence in office? Read the full post here.

From Geekosystem: Image manipulation wizards rejoice! Adobe’s mobile Photoshop, Photoshop Touch, has now been released for the iPad 2, for a paltry sum of $9.99. This version of Photoshop takes core features from its big brother and stuffs them into the tablet, so you can touch up pictures by adding aliens into the background on the go. This release is the first of six tablet apps Adobe has been working on, and it certainly makes sense that Adobe would begin their assault on mobile with its flagship image manipulation software. For more, read here.

What would you have done, had Sacha Baron Cohen spilled Kim Jong Il’s “ashes” on you? Gossip Cop reports that Ryan Seacrest, who Baron Cohen targeted for his red-carpet stunt, was at least a little miffed by the act. Speculations on whether or not this was staged all lead to this: Seacrest did not seem to know this was coming. “This is going too normally…” he said to himself, just before “the dictator” tipped the urn over Seacrest’s tuxedo – famous last words. For more, read here.

Jane Birkin on that “bloody Birkin bag.” Styleite reports on the oh-so-famous bag, which was borne when Birkin sat next to Hermès CEO Jean-Louis Dumas on a plane. She owns only one, which she likes to decorate. She’s on her fourth – the first three were auctioned off for charity, making it a “jolly bag, not a snobbish bag.” For more, read here. 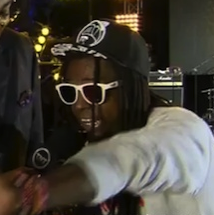 Lil’ Wayne gets a lil wasted. Sports Grid reports on the rapper giving a less-than-sober interview on TNT, giving his all star game predictions. To be fair, he did throw a party the night before with Dwight Howard. The video is still pretty funny. To watch it, and read the full post, click here.

From The Mary Sue: So, for his post-Oscar show, Jimmy Kimmel threw together an epic fake movie trailer with all of his famous friends. For real: nearly every single famous person in Hollywood is in this trailer, and we are a better people for it. The full video is after the jump, but you really had to see that first, and when you watch the two, you’ll see why. So watch it. We promise, the video is a little over nine minutes long, but you will be laughing the whole time. See it here.

Mitt Romney: a dork? The Jane Dough reports that Kathleen Parker, a conservative columnist, seems to think so. “You know Mitt Romney has a very hard time connecting, I think we’ve accepted that,” Parker said during her segment. “And I think we can also unanimously conclude that Mitt Romney, for all of his good qualities, is a dork.” For more on what she said, read here.