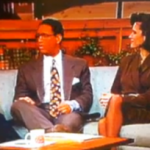 Mediaite has an impassioned defense of the NBC employee who leaked a clip of Katie Couric and Bryant Gumbel puzzling over “the internet” in 1994, and who was reportedly fired over the incident. Though the clip is mildly embarrassing for Couric and Gumbel, who wasn’t a bit confused about the internet in 1994? It’s a great time capsule! Hopefully the poster finds gainful employment elsewhere. To see the clip, click here. 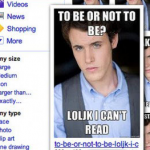 On Geekosystem: someone has put their SEO powers to dark, dark use. A mystery girl managed to upload a slew of LOLcat-esque photos of her ex-boyfriend on the internet such that though the original images were removed, they live on like vengeful ghosts in Google Image searches. YIIIIIIKES. To read the full post, click here. 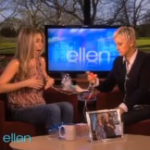 Styleite has a completely unnecessary and absurd clip from “Ellen” (that is to say, hilarious and awesome), in which Jennifer Aniston product-tests a vibrating bra. The bra is supposed to “enhance” the wearer’s breasts, I suppose in the same vein that the boob-augmenting “exercises” from Are You There, God? It’s Me, Margaret did. Basically, if you’d like to hear Aniston remark to Ellen that she feels like she’s being milked, this is the clip for you. Watch it here.

Sportsgrid covered Bill O’Reilly’s weird self-hyping (is that a thing?) of his pre-Superbowl interview with President Obama. Perhaps feeling a little anxious about competing with the biggest sports event in America, O’Reilly insisted that it would be the most-watched interview “in the history of mankind.” He also reminded us that he “used to be” an athlete. Aww, Bill! Get the full post here. 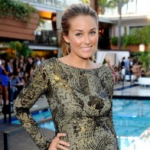 Gossip Cop reports that Lauren Conrad has been spurned by MTV. Or, to hear her tell it, the show she developed for the network that was recently dropped was “too highbrow” for the “Jersey Shore”-loving, “Skins”-watching fans of the Music Television channel, and that is why we won’t be seeing more of Conrad’s catalogue of hurt/confused facial expressions anytime soon. To read the full post, click here.