From Mediaite: Have a listen to one of many in the  continuing  debates on the topic of Whitney Houston and  drugs. Thursday  morning’s Today Show hosted a back and  forth between Fox  News’ Bill O’Reilly and Matt Lauer, who  argued about the  media and its coverage of celebrity drug  habits. O’Reilly  lauded himself on being possibly the only  commentator to say,  “Hey Whitney, you better knock it off or  you’re going to be in  the ground.” His criticism of the media is that their coverage of these things is simply exploitative – and could instead be, what, therapeutic? Watch the discussion here.

If nothing else, she probably just needs to shed the “Hannah Montana” thing. Gossip Cop

refutes claims made against Miley Cyrus by the Star, alleging the young star is spiraling downwards into a mess off drugs and drinking and “too much flirting” when she’s in a relationship. Star thinks she’s gotten herself in with some “very shady” people, and friends’ fears abound. Who knows – she’s also just a pretty young girl with money to play with. It all seems a little too sensational (not to mention vague) to be true. Read the full post here. 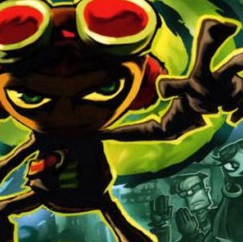 We can officially start dreaming about the  sequel  to Psychonauts, which Geekosystem calls one  of “the best  video games ever made.” Apparently there was  some hype a  while ago which turned out to be false, because  funding  was short. Another video game big wig, Notch, says he’ll be  doing his best to make it happen now, potentially working  with  Tim Schafer’s development studio Double Fine. Read  the full post here.

It’s the end of fashion week, which means for the Occupy movement that it’s time to do 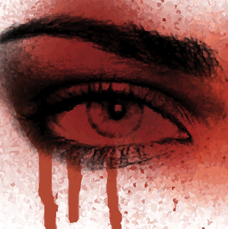 something. Styleite reports on their plans, inevitably a commentary on the fashion industry (which caters, to be sure, very much to the 1%). Unfortunately for Calvin Klein, whose designer Francisco Costa will host one of two shows today starting at 2pm, Occupiers will do their thing then. The protestors will be fashionable in their own right, for sure, with plans for statement make-up (among other things, no doubt). For details, click here. 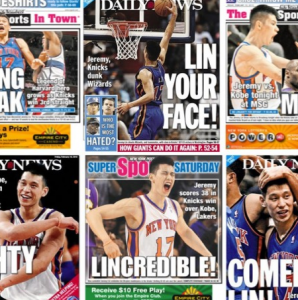 From Sportsgrid: Maybe you’ve had enough of the Jeremy  Lin puns…but you probably haven’t.  If the latter  is true,  take a look at this collage of headlines and front  pages.  It’s jammed. Full to the lin! That was a bad one, but  the  rest are pretty good. 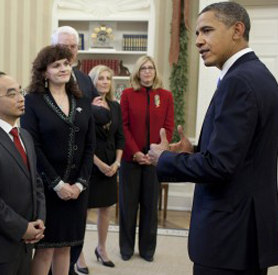 From The Mary Sue: nerd alert! Dr. Karen Panetta has been a proud geek since her days at Tufts. Last year, she received a Presidential Award for Excellence in Science, Mathematics and Engineering Mentoring from Obama. She’s all about promoting (and advancing) well, girl nerds in the world. “Nerd Girls”, which she started at Tufts, is the blossoming program she runs to do it. For more on Panetta and her work, click here: 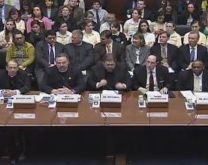 What’s wrong with this picture? The Jane Dough  reports on the panel (pictured here) for the House  Committee on Oversight and Government Reform,  which seems to have made an oversight itself. The  hot topic of Obama’s Affordable Health Care Act  was a contraception for women mandate. An  outraged congress member Carolyn Maloney  appropriately asked,  where are the women? She  then stormed out. Watch the video here.