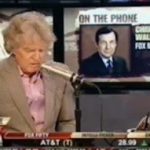 On Mediaite: Chris Wallace and Ann Coulter are fighting! Coulter was mad at Wallace after he basically forced Rick Santorum to admit that his opposition to gays in the military was roughly equivalent to opposing the enlistment of African-Americans. For his part, Wallace shot back that he doesn’t pay much attention to Coulter after she accused 9/11 widows of self-promotion. To watch the full clip, click here. 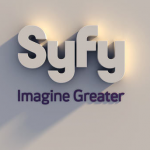 Geekosystem takes a look at established television shows that are in danger of cancellation, either due to salary negotiations, creative ennui, or just plain being around for too long. To see the full list, click here. 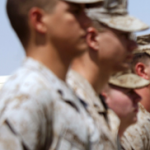 Styleite has a weird little story about the increasing popularity of eyebrow threading amongst…U.S. soldiers? This is the strangest beauty trend I can think of for military personnel stationed abroad. Manicures would make more sense! To read the full post, click here. 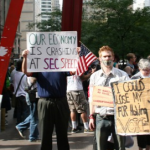 On Sportsgrid today: it would appear that some people are taking advantage of the big-tent nature of Occupy Wall Street to air grievances that don’t have a whole lot to do with Wall Street. For instance, this gentleman, who brought a Game Day sign to the protest. To read the full post, click here. 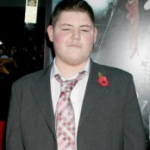 Gossip Cop reports that one half of Crabbe and Goyle from the “Harry Potter” films has been arrested for possession of a bomb he intended to use in the London riots. Um…I guess dude wasn’t really playing against type? To read the full post, click here. 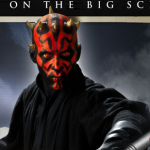 On The Mary Sue: wait, they’re releaseing “Star Wars Episode 1: The Phantom Menace” in 3D? I thought we made it clear that we all hated it the first time around! It’s the horror villain of movies — it just keeps coming back! To get the full post, click here. 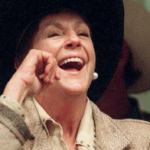 Mogulite reports that a woman worth $20.9 billion refuses FOR THE SECOND TIME to get a cab and has been arrested for DWI. The woman in question is Alice Walton, daughter of Walmart founder Sam, and alleged killer of women. Seriously, last time she was driving drunk she hit and killed someone. Get the full post here.