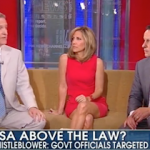 From Mediaite:  A different whistleblower claims that the NSA targeted government officials including Obama, judges, high ranking military officials, and lawmakers.  Mediaite reports, “‘On Friday, Fox & Friends tackled the recent report about Bush-era whistleblower Russell Tice — who came forward with information about warrantless wiretapping — and his claim that the NSA wiretapped President Obama back in 2004. The report demonstrates why all Americans should care about this issue, they asserted, criticizing an intelligence community that appears to be “out of control.’  ‘Here’s the big one,’ Tice said. ‘This was in summer of 2004, one of the papers that I held in my hand was to wiretap a bunch of numbers associated with a 40-something-year-old wannabe senator for Illinois. You wouldn’t happen to know where that guy lives right now would you? It’s a big white house in Washington, D.C. That’s who they went after, and that’s the president of the United States now.'”  Read on here. 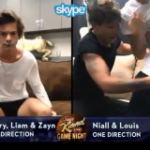 From Gossip Cop:  Last night, Jimmy Kimmel Live skyped the One Direction band mates for a scavenger hunt in their dressing room.  It was a close competition between the two teams.  Gossip Cop reports, “One Direction played a hilarious scavenger hunt via Skype on Thursday’s “Game Night” edition of ‘Jimmy Kimmel Live.’ Divided into two teams — Harry Styles, Zayn Malik and Liam Payne versus Louis Tomlinson and Niall Horan — the boy band had to find items or complete tasks as quickly as possible.  Among Kimmel’s instructions were to put underwear on over their pants, and Styles had a more risqué response than his fellow singers.  And the talk show host had a very interesting prize for the winning group.”  Watch this hilarious video here. 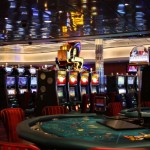 From Geekosystem:  Gambling online is okay, right?  Not according to Sheldon Adelson.  Geekosystem explains, “As online gambling with real money continues to make small but real inroads across the United States, people are starting to look more closely at the implications of playing online poker with real life cash. Yesterday afternoon, Bloomberg Television interviewed something of an expert in the field in business magnate Sheldon Adelson, who had a lot to say about the rise of online gambling – specifically, that he was morally opposed to its existence. What’s so interesting about that, you ask? Nothing really, except that Adelson made most of his considerable fortune from — you guessed it — owning a bunch of brick-and-mortar casinos around the world. Not that this would affect how he feels about online casinos or anything. Heaven forbid.”  Read on here. 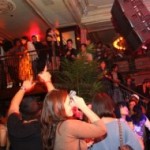 From Styleite:  Take a vacation at one of these twelve favorite spots of fashion designers, photographers, models, and editors.  Styleite‘s Hannah Ongley writes, “Fashion’s it crowd isn’t one you’d expect to run into at Swim Club, but going to Swim Club isn’t normally code for drinking bloody Marys in a desert-chic Palm Springs oasis while resident DJs interrupt your poolside reading. The man behind Ace Hotel is now challenging himself to make something else appeal to the notoriously fickle fashion pack – a bland business hotel in Shoreditch, London.  This is the new site for the fifth Ace outpost. It’s set to open in September, so if you’re in Londontown for fashion week you might want to think about booking a room now – ever tried to secure a spot at the Palm Springs Ace closer than six months prior to Coachella?”  Read on here. 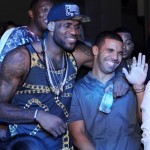 From SportsGrid:  The Miami Heat are this NBA Championship’s Champions… and then there is Drake.  SportsGrid explains, “As you’d expect, TMZ has the details of their celebration, and we thank them for that. Go there for video of their clubbing shenanigans. Warning: it features an ultra-toolish LeBron James, even more toolish than you’d expect.  And also via TMZ, we have a slideshow, where Drake is in basically every picture. Drake is not a professional basketball player. Drake could not be a professional basketball player if he so desired. The slideshow will hate on Drake. I hope you don’t mind.  Oh, and Drake was denied entry into the locker room after the game. He was mad, bros. He tried to make a funny joke, ‘I am media.’ It wasn’t funny, because he’s Drake.” 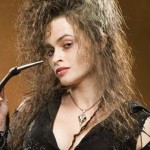 From The Mary Sue:  Helena Bonham Carter is joining the cast of Branagh’s Cinderella.  The Mary Sue reports, “Well now. This is some unexpected casting. But also really cool. Helena Bonham Carter has signed on to play the fairy godmother in Kenneth Branagh‘s live-action version of Cinderella.  Bring on the slightly creepy fairy godmother. Technically speaking she spies on Cinderella, which is a little weird, and the whole turning a horse and a dog into men aspect of the story has some disturbing things to say about the nature of humanity. How did I not see this before?!  If you’d asked me earlier which role I thought Bonham Carter would be most likely to play in a hypothetical live-action Cinderella, I’d have said the evil stepmother, a role that’s instead being played by Cate Blanchett (bow down). Having her be the fairy godmother instead is some interesting casting, and God knows I’m a sucker for that.”  Read on here. 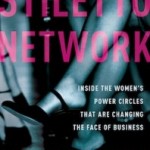 From The Jane Dough:  Is there a local Stiletto Network near you?  If yes, get involved.  If no, get one started.  If you have never heard of such a thing, read on.  The Jane Dough writes, “Stiletto Networks are already changing the world. A movement has begun, but the purpose of this book is not just to identify it. It’s to catalyze it as well. Why shouldn’t more women back each other? Why shouldn’t they be angling to make their companies and schools and communities and cities and countries better for themselves and others? Why shouldn’t they be banding together and tipping the scales?  Each Stiletto Network is as unique as the women it convenes, but they do have common characteristics. Their stories provide lessons and tips to help others forge their own groups.”  Read on here. 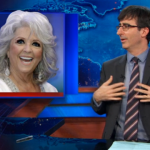 From The Braiser:  There’s type-1 and type-2 diabetes, but who knew that there was the same categorization for racism.  The Braiser explains “We think John Oliver’s doing an admirable job of taking over The Daily Show while boss Jon Stewart has disappeared to direct a political movie. Case in point: this clip from last night, where he savaged Paula Deen for her recently-revealed oblivious racism.  Of course, Oliver’s shocked that Deen didn’t use the n-word while singing along to the Wu-Tang Clan, but the well-worn path of ‘Paula Deen Fat Butter Jokes’ gets a refreshing jolt from the British comedian, as well as a Chris Rock-inspired reason that he can use the n-word, while Deen can’t: ‘I would ask you to look at the picture [of Rock] and try to figure that out, but I’m worried that you might just get confused as to why he’s not wearing a white jacket and black bow tie.’ He then invites correspondent Jessica Williams to discuss the possibility that Deen suffers from ‘either Type-1 or Type-2 Racism.'”  Read on here.