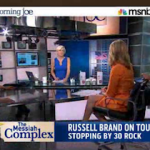 From Mediaite:  Russell Brand joins Morning Joe in what started as a pleasant visit but is quickly dominated by Brand, even resulting in a Brand scolding of the Morning Joe.  Mediaite reports: “Actor and comedian Russell Brand paid a visit to the Morning Joe set, which co-host Mika Brzezinski admitted made her nervous. While the segment — intended to promote his comedy tour ‘Messiah Complex’ — started out with compliments all around, Brand soon took over, showed them how they should be doing their jobs, and… ended by calling Brzezinski a ‘shaft grasper.’  After a few minutes of quips about not understanding Brand’s accent and referring to him in third person, Brand addressed Brzezinski, Brian Shactman and the BBC’s Katty Kay, telling them, ‘You are talking about me as if I’m not here, and as if I’m an extraterrestrial.'”  Read on here. 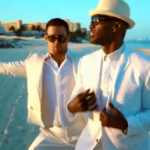 From Gossip Cop:  Channing Tatum has gone from male dancer, to Hollywood movie star, to capturing the hearts of so many that a song was written in his honor.  Gossip Cop explains, “Jimmy Kimmel and Jamie Foxx’s “Channing All Over Your Tatum” now has an official music video, and it’s every bit as amazing as it sounds.  The ode to Channing Tatum and what he does to women premiered on the “Jimmy Kimmel Live” Oscars special in February.  The track has now been awesomely remixed, with Olivia Munn, Gabourey Sidibe, and even Miley Cyrus getting in on the action.  There are also blink-and-you’ll-miss-’em glimpses of Kimmel’s nemesis Matt Damon.”  Watch the music video on here. 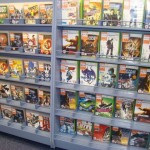 From Geekosystem:  Why are companies trying to stop video game sharing?  Because our used video games are actually affordable.  Explains Geekosystem, “Despite the popularity of the Gears of War series, game designer Cliff Bleszinski isn’t particularly well known for his ability to embrace the gaming culture that exists outside the industry’s interests. That’s probably why he recently sent out a series of tweets backing XBox One’s decision to make reselling used games a thing of the past. According to him, that’s the only way to save the $60 game model — and the entire gaming industry as a result — from collapsing. Yes, because it’s not the industry’s fault for making games so expensive, it’s your fault for not being able to afford them at the full retail price. Silly you, choosing to spend that money on food or rent!”  Read on here. 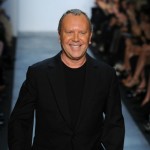 From Styleite:  Some CEOs make less than others.  Some really famous CEOs of billion dollar companies make less than most CEOs.  Styleite’s Lauren Valenti explains, “The brand Michael Kors is now valued at $12.38 billion, but today WWD reports that Kors himself, who serves as honorary chairman, chief creative officer and director, only makes $7.6 million. On top of that, despite his company’s success following its IPO, the designer took a massive 46.6 percent pay cut, slicing over $6 million from his yachting budget this year.  Last fiscal year, Kors’ took home $13.6 million — and call us money-grubbing, but that already sounds low. We’re no math wizards, but it seems like something’s not adding up for our favorite perma-tan designer, and it’s totally making us rethink our plan to helm a billion-dollar company and go public.”  Read on here. 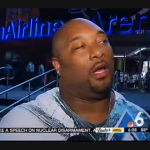 From SportsGrid:  It is clear that the Miami Heat won last night’s NBA Final Game 6, right?  But are the Miami Heat fans that left the game early last night still confused about which team won?  Maybe we shouldn’t tell them.  SportsGrid‘s Matt Rudnitsky reports, “As you know, Miami Heat fans left last night’s NBA Finals Game 6 before it was over, presumably seeing a fat lady belting a Spurs victory cry, tossing their $10,000 ticket down and heading for the exits. As you also know, these fans got the last laugh, because the Heat won.  But, wait. It’s our turn to laugh again. Last laugh, redistributed.  ‘I can’t believe they lost. That’s the only think I’m thinking right now. They were oh-so-close'”  Read on here. 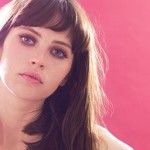 From The Mary Sue:  Felicity Jones might have slipped up and subtly confirmed her role as the Black Cat in The Amazing Spider-Man 2.  The Mary Sue‘s Rebecca Pahle reports: “During the press junket for her new indie film Breathe In, actress Felicity Jones was caught off guard when the interviewer straight up asked her whether she’s ‘looking forward to everyone seeing you as [CHARACTER NAME REDACTED]?’ in The Amazing Spider-Man 2. Wow. Go right for it, interviewer.  You can judge for yourself, but Jones’ response sure makes it look to me like she is playing that character. Unmarked spoilers behind the cut, be ye warned.  That Jones is playing Black Cat, if true, isn’t that big a surprise. People were speculating that that’s who she’d play all the way back when she was cast.”  Read on here. 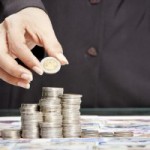 From The Jane Dough:  How to make more money using skills that you already have.  The Jane Dough writes, “I wanted life’s little luxuries, like getting my hair cut without guilt and replacing my hand-me-down furniture. I also had big dreams for the upcoming years: I wanted to get married to my boyfriend, travel and buy a house.  And I knew there wasn’t much potential for advancement where I was.  I knew I had to get out before I wasted more time there being overlooked for promotions.  It became very clear to me that this job wouldn’t allow me to live the life I wanted, but I didn’t have the time or money to pursue further degrees or certifications. Instead of scrapping my dreams, I leveraged my existing skills to make more money in the following three ways.”  Read them on here. 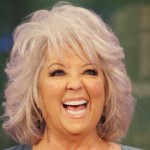 From The Braiser:  Paula Deen, you might be in trouble.  The Braiser writes, “Okay, this latest report about Deen’s comments on a videotaped deposition came from a National Enquirer Exclusive, but we do know that she’s facing a lawsuit filed by a former restaurant employee for admittedly using the ‘N-word’ to refer to her black employees. To recap the facts of this $1.2 million lawsuit: a former manager of Bubba’s Oyster and Seafood House, the restaurant owned by Deen’s brother Bubba, claimed that not only did Bubba repeatedly sexually harassed her (by, say, passing photos of two women having sex around at a staff meeting), he also frequently used racial slurs to refer to black employees, and segregated bathrooms and entrances.”  Read on here.