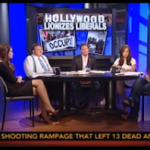 From Mediaite:  The Five takes HBO’s fictional cable news show, The Newsroom, seriously.  Mediaite reports, “With HBO’s The Newsroom returning for a second season next month, The Five‘s Greg Gutfeld thought now was a good time to look ahead at how the show plans on treating various political stories when it comes back. The host slammed the “liberal fantasy” drama for trashing the “evil” tea party movement while glorifying Occupy Wall Street. ‘Hollywood gets everything wrong again,’ Gutfeld said.  Even Bob Beckel, who said he mostly enjoys Aaron Sorkin‘s show about a fictional cable news show, said it rankled him when the lead character on the show, Will McAvoy, played by Jeff Daniels, called the tea party the ‘American Taliban.’ Of course, in the context of the show, it’s meant to be an incendiary, controversial statement.”  Read on here. 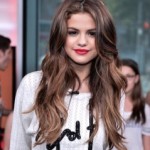 From Gossip Cop:  Selena Gomez is a big sister.  Reports Gossip Cop, “As Gossip Cop previously reported, the singer’s mom Mandy and stepdad Brian Teefey welcomed a baby girl earlier this week.  Gomez took to Twitter on Friday evening to formally announce the news, and thank fans for their support.  ‘Momma, Brian, and me are all so grateful for all your well wishes,’ wrote the starlet. ‘My lil sissy Gracie Elliot Teefey was born on June 12th.’  She added, ‘Luv you all XO.’  Gomez’s pal Demi Lovato was one of the first to celebrate the news, tweeting Thursday night, ‘@selenagomez IS A BIG SISTER!!!!!! Everyone congratulate her and her family!!!!!! #CONGRATSSELENA!!!!’  We wish the Gomez-Teefey family well.”  Read on here. 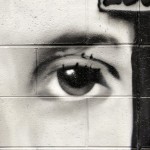 From Geekosystem:  And some cultures think that kissing is weird.  Geekosystem explains, “I also get that teenagers are sort of dumb and will try things like putting vodka in their eyes to get drunk faster because they mistakenly think they are invincible. But I do not understand how it is that some people get off on licking each other’s eyeballs, and apparently it’s becoming a fad among some preteens in Japan. Why, you guys. What convinced you all to do this to each other?  ‘Oculolinctus,’ or ‘worming’ as it is also called — WHY WOULD YOU CALL IT THAT OH GOD – has been around since the 2000s, at least according to the Internet. Naturally it’s the sort of thing that there are already entire fetish websites and devoted communities because, as rule 34 states, if you can imagine it, there is porn of it on the Internet.”  Read on here. 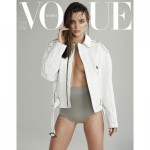 From Styleite:  Miranda Kerr on the cover of vogue topless and wearing granny panties?  Explains Styleite, “Weird things happen when Miranda Kerr goes to East Asia, and now she’s going home the unofficial face of high-fashion Spanx. Or are they granny panties?  Whatever they are, the stomachless coconut water-guzzling yogi is doing them some serious justice on the July 2013 cover of Korean Vogue. She’s also teamed them with a Proenza Schouler jacket because she’s just a little bit edgy, too. Or maybe she’s bringing her 80/20 philosophy out of the kitchen and into to her wardrobe: 80% percent fashion, 20% comfort.  Seems Miranda’s Bling Ring lingerie heist was a blessing in disguise.”  Read on here. 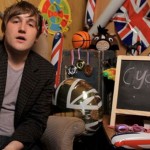 From SportsGrid:  Anthony Richardson is making comedy videos again.  SportsGrid reports, “In one of the funniest videos that I’ve seen in a long while, British comedian Anthony Richardson added some commentary over highlights of a recent Yankees-Red Sox game. This isn’t the first time Richardson has done something like this, as he made a similar video over some footage of a computer simulation of a basketball game between the Dream Team and 2012 Team USA last year.  From noting an uncanny resemblance between Ichiro and Joseph Gordon-Levitt to pointing out how much baseball uniforms look like full-body pajama suits, Richardson’s video is without a doubt worth a watch.”  Watch his video here. 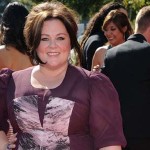 From The Mary Sue:  Rex Reed really took a whack at Melissa McCarthy in his review of her new movie, Identity Theif.  But McCarthy is better than him.  How did she respond?  The Mary Sue answers, “Comedian Melissa McCarthy recently responded to the vitriolic comments made by film critic Rex Reed towards her in a New York Observer review of Identity Thief back in February.  Where Reed was unnecesarily cruel, and stepped far beyond his role as a movie critic in his descriptions and condemnations of McCarthy, McCarthy’s response is classy and level headed.First of all, let’s all be collectively jealous of how fun McCarthy’s family sounds.  Now, though she shouldn’t have to be faced with such an offensive and hateful attitude to begin with, the Emmy Award winning actress’s response is perfect, and brings up some good points.”  Read on here. 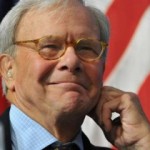 From The Jane Dough:  And you thought that you’re father was embarrassing the last time he was in a room full of people.  Explains The Jane Dough, “Apparently, Tom Brokaw and my dad have a lot in common. They’re both journalists, my mom has spotted each of them at party at least once, and they’ve both raised only daughters after growing up in masculine households. I’m sure my father has a lot of ridiculous stories to tell after living in a house full of females for so long (he gets super excited when we bring boyfriends over for dinner just because there’s fellow Y chromosome in the mix) but I’m thankful he doesn’t have a public forum to air these grievances as Brokaw does. If he did, my 16-year-old sister would probably actually literally die of embarrassment.  In honor of Father’s Day, TIME assembled a team of famous fathers to write open letters to their daughters. These letters were mostly sweet, albeit a bit boring, but Brokaw’s letter, as Gawker’s Caity Weaver wrote, is ‘a passive-aggressive master class in embarrassment.'”  Read on here. 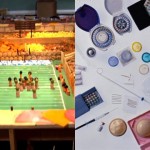 From The Braiser:  Americans spend about $1.02 billion each year on Super Bowl snacks – enough to solve the global health care crisis.  The Braiser reports, “Yes, it’s about eight-ish months until the next Super Bowl, but we know the minds of Americans well enough to claim that they’re already thinking about nachos, wings, and many fine, deep-fried and alcoholic things. In fact, Americans spend nearly $1.02 billion each year on Super Bowl snacks, a sum which — oh, this is awkward and depressing — could singlehandedly solve the global need for better family planning. (Logic lesson: food babies > real babies.)  PolicyMic highlights a Population Action International survey which found that over 222 million women in the world (about half the population of the United States) don’t have access to reproductive health resources, birth control in particular.”  Read on here.