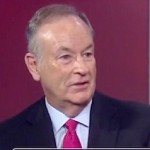 From Mediaite:  O’Reilly denounces NAACP and says that Trayvon Martin’s death is all about the money.  Mediaite reports, “Bill O’Reilly joined Fox And Friends Wednesday morning to decry what he calls the ‘exploitation’ of Trayvon Martin’s death by African American organizations and celebrities, saying the outraged reaction to the verdict was ‘all about the money.’  ‘It’s an industry,’ O’Reilly said, ‘the grievance industry. There’s a lot of money in it, there’s a lot of power in it.’  ‘I think the NAACP should be watchdogs, they should be looking out for their crew,’ he continued. ‘But they’re not going to basically say, ‘Okay, we’re going to hear another point of view,’ because it’s a business. They’re in business. That’s what they do. That’s how they get paid. Same thing with the liberal commentators and the mainstream media.'”  Read on here. 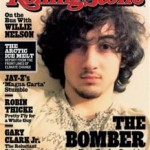 From Gossip Cop:  Rolling Stone Magazine thought it’d be a great idea to put Dzhokhar Tsarnaev on the cover of the August issue.  Gossip Cop reports, “Rolling Stone has ignited a firestorm of criticism for putting Boston Maraton bombing suspect Dzhokhar Tsarnaev on the cover of its latest issue.  The photo of Tsarnaev is a self-taken picture that circulated on the Internet during the manhunt for the suspect and his brother Tamerlan Tsarnaev, who was killed in a the face-off with police.  The magazine’s cover caption reads, ‘How a popular, promising student was failed by his family, fell into radical Islam and became a monster.’  On Wednesday morning, Rolling Stone became a worldwide trending topic on Twitter after a number of readers slammed the mag for what they consider glorifying terrorism.”  Read on here. 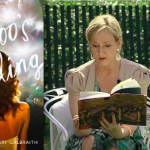 From Geekosystem:  Linguistic analysis helped unmask Robert Galbraith as J.K. Rowling.  Explains Geekosystem, “Over the weekend, we learned that novelist Robert Galbraith, who made a splash with his critically acclaimed debut novel The Cuckoo’s Calling, was not actually making his debut as an author. Nor was he a him. Robert Galbraith was in fact megasuperfamous J.K. Rowling, attempting to do what she loves (write) without the wildly high expectations placed on her as the billionaire-author of Harry Potter. An anonymous tweet from an already-discontinued account first made the claim, and after it was supported with an analytic linguistic program, Rowling confirmed the story.”  Read on here. 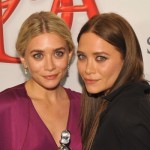 From Styleite:  Lysa Cooper at least likes the way the educated Olsen twins rip off other designers.  Styleite explains, “Juding by her interview in this month’s Vogue Italia, there aren’t many things that celebrity stylist Lysa Cooper actually likes. In fact they’re pretty much limited to Beyoncé and the personal style of homeless people in California. Lil Kim’s okay too. Oh, and Mary-Kate and Ashley Olsen’s The Row – kinda. But, well, not really. At least, she likes the way they go about ripping off other designers.  Cooper’s response when asked for her opinion on celebrity fashion lines is (duh) not positive. But after calling bullshit and suggesting celebs get some education, she gives our favorite mini moguls the most backhanded compliment in the history of backhanded compliments.”  Read on here. 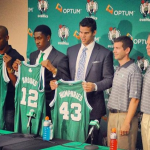 From SportsGrid:  In comparison to how successful his ex-wife continues to be after their divorce, at least we recognize Humphries name.  SportsGrid‘s Zach Berger writes, “Unless you’ve been living under a rock — and no disrespect intended if you have — you know that the Brooklyn Nets and Boston Celtics completed a blockbuster trade that sent a pile of garbage and a few boxes of Gatorade to Boston for Kevin Garnett, Paul Pierce, and Jason Terry.  That garbage and fruity sports beverage was actually Kris Humphries, Gerald Wallace, Keith Bogans, MarShon Brooks, and some other dude nobody’s ever heard of who was waived immediately and was only included for financial purposes. (His name is Kris Joseph.)”  Read on here. 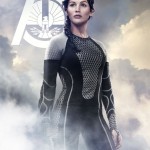 From The Mary Sue:  The new Hunger Games posters were released for Catching Fire yesterday.  Each of the eleven victors were photographed for their own posters.  Reports The Mary Sue, “These posters were released yesterday to a flurry of excitement, and rightfully. This is the first official look at the main characters suited up and ready for action in the newest movie of the Hunger Games trilogy, and the anticipation is finally coming to a head. These actors look amazing in-costume and it’s even more exciting to think that it won’t be long until we’re seeing them on the big screen!  Also, apparently people were disappointed that the actor playing Finnick isn’t attractive enough. Hah. Haha. Sure. Right.”  Read on here.

From The Jane Dough:  Episode three of “The Broad Experience” discusses women and technology.  The Jane Dough reports, “Today we bring you the third episode of ‘The Broad Experience,’ a podcast dedicated to hashing out the issues facing working women today. Episode 3 is about ‘women and technology,’ and, more specifically, why fewer women graduate with computer science degrees today than they did in the ’80s and why tech has been a male-dominated industry for so long.  Episode guests include academic and entrepreneur Vivek Wadhaw and app developer and founder of Lifehacker, Gina Trapani. You can listen to episode three below, and then tell us what you think about the exclusivity of the tech industry and the lack of women in Silicon Valley in the comments.”  Listen to the podcast here. 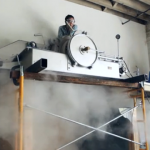 From The Braiser:  You can now buy air cannon accessories at the Museum of Food and Drink.  Reports The Braiser, “Thanks to the contributions of thousands of people who love both food and explosions, Dave Arnold and the in-progress Museum Of Food and Drink (MOFAD) can now purchase accessories for their shiny new toy: this badass, 3200-pound air puffing cannon that does nothing but explode food.  The Kickstarter, which we covered when it first launched, met its $80,000 goal with three days left to fund it, meaning that if anyone continues to fund it, the famous Booker and Dax bartender might be able to buy a few more exploding food machines — like, say, a couple dozen Whirly-Pops. (Why would Dave Arnold need a couple dozen Whirly-Pops? Why the hell not?)”  Read on here.