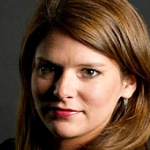 From Mediaite: As news continue to break about the Navy Yard shooting in Washington DC this morning, and some stations are reporting more accurately than others. Mediaite reports, “NBC News reporter Kasie Hunt reporting live from the scene of an ongoing mass shooting at the Washington Navy Yard in Washington D.C. noted that the area is being secured by members of the Naval Criminal Investigative Service (NCIS). ‘It’s like a TV show gone terribly wrong,’ she said, referencing the CBS drama of the same name. ‘We have a steady rain here,’ Hunt reported. ‘Sort of matching the mood of the day with this tragic unfolding of events with four people confirmed dead. ‘There are a litany of law enforcement agencies who are here from across the region,’ she continued. ‘I’m standing not too far from a group of ATF agents and one man who is wearing a hat that says NCIS.'” Watch the clip here.

From Gossip Cop: Last night, a new Miss America was crowned, but the country didn’t respond as favorably. Writes Gossip Cop, “Miss America Nina Davuluri is responding to the obscene number of racist comments that poured in on Twitter following her crowning at Sunday’s annual pageant. As Gossip Cop previously reported, the former Miss New York is the first ever Miss America winner of Indian heritage, an accomplishment she holds proudly. ‘I’m so happy this organization has embraced diversity,’ Davuluri said at the post-show press conference. ‘I’m thankful there are children watching at home who can finally relate to a new Miss America.’ Among the disturbing missives sent in the wake of the 24-year-old beauty queen’s win were a number of tweets referring to her as Arab, ‘Miss Terrorist,’ ‘Miss Al-Qaeda,’ and ‘Miss 7-11.’ Some even suggested that picking the native New Yorker was an insult to those who lost their lives in the September 11th attacks.” Read more here. 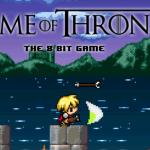 From Geekosystem: Ever wanted to play an actual Game of Thrones 8-bit RPG? Well, you can. Reports Geekosystem, “Featuring awesomest-characters-ever Tyrion Lannister, Daenerys Targaryen, and Davos Seaworth (oh… and Jon Snow) as playable, Game of Thrones: The 8-bit Game takes you all over Westeros and the Dothraki Sea as you play through George R. R. Martin’s famous series. Built in three months using Arcade Games Studio, Alves worked with pixel artist Carl Olsson, and scored the game with Floating Point’s excellent covers. ‘I’ve tried to make some videogames before, but I was not very happy with the result,’ Alves, a 31-year-old engineer and comic artist based in Uruguay, told Wired. ‘This time, I spent more time and effort thinking about reaching a larger public. I knew I had to use a franchise that is known, and Game of Thrones has a universe very easily adaptable to a platform game: Mythical creatures, great heroes, terrible battles. So the decision was easy.’” Read the story here. 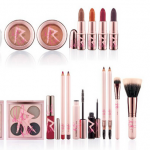 From Styleite: What’s the scoop on Rihanna’s new line of cosmetics? Styleite answers, “There was a time when RiRi Woo was the rouge on everyone’s lips, and it took Rihanna’s beauty collection for MAC from second-rate celebrity collaboration to full blown phenomenon. It’s proof that everything Rihanna touches turns to gold — except the rat tail or blue pout, perhaps — and we’ve been waiting with bated breath to see what her second round of offerings had in store for us. Now that line has been unveiled in full, and we’re swooning over the autumnal lipsticks, smoky shadows, liquid liner, bronzer/blush, lush faux lashes, and more. The collection will hit MAC stores on September 26th and online on September 30, and all other stores October 3 through October 31. See the full line, below.” Read all about it here. 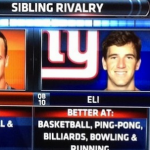 From SportsGrid: Peyton Manning may have bested his brother, Eli, in football yesterday. But Eli Manning is superior in other fields. Writes SportsGrid, “Peyton Manning beat Eli Manning in the cleverly named ‘Manningbowl’ yesterday. Quite easily, in fact. So, Peyton is better than Eli at football, because we are Americans, and we determine superiority based on the most recent triumph in our memory. But what about other sports? CBS had a cool graphic last night, probably ascertaining the information from ESPN ‘sources.'” Said graphic stated that while Peyton is better at “golf, baseball and darts,” Eli is superior at “basketball, ping pong, billiards, bowling and running.” SportsGrid concludes that, “Watching them play shuffleboard for weeks on end, always to a draw, would be the most entertaining reality TV show of all time.” See the graphic here. 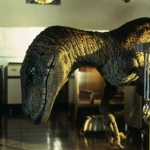 From The Mary Sue: For those of you scared of Jurassic Park, fear no more. Writes The Mary Sue, “[T]o all you daredevils who want science to be able to clone dinosaurs, I’m sorry, but researchers at the University of Manchester have come out and said that it almost definitely won’t happen. The team analyzed insects fossilized in copal, aka solidified tree resin that’s too young to be amber. Using cutting-edge technology they attempted to extract DNA from the insects but found that the samples they got were extremely small, and that most of the DNA they did manage to extract was from bacteria. Definitely uncloneable. And what’s more, the insects range from 60-10,600 years old, making it exponentially younger than dino DNA.” Read on here. 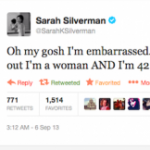 From The Jane Dough: Today, the site talks about the audacity of one of its favorite funny ladies, Sarah Silverman. Writes Many of xoJane, “On Friday — a few days after a barrage of jokes about her age during the ‘Comedy Central Roast of James Franco’ — Sarah Silverman tweeted: ‘Oh my gosh I’m embarrassed. I just found out I’m a woman AND I’m 42. I am so sorry.’ Her biting tenor of sarcasm? Pure genius. Silverman has this razor-sharp ability to call out the insanity of Hollywood just as expertly as Tina Fey did in her 2011 memoir ‘Bossypants.’ It was Fey, who wrote in that book: ‘I have a suspicion that the definition of ‘crazy’ in show business is a woman who keeps talking even after no one wants to fuck her anymore.'” Read the full commentary here. 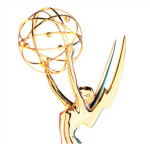 From The Braiser: How has food TV fared thus far in this year’s Primetime Emmy’s? The Braiser reports, “The 65th Annual Primetime Creative Arts Emmy Awards were held last night at the Nokia Theater in Los Angeles, and, while the broadcast will air in its entirety on Saturday, September 21, 2013 (the night before thePrimetime Emmys are set to air), we thought you might want to know how your favorite food shows fared, in case you didn’t want to sit through 85 awards presentations. Obviously, the big news of the night was Parts Unknown taking two awards, and Last Chance Kitchen claiming the award for Outstanding Creative Achievement In Interactive Media — Multiplatform Storytelling, announced in August. Below, we’ve listed all the categories in which a food show was nominated, and who won.” See the full list of food programming award winners here.