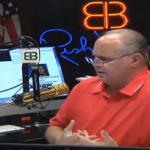 From Mediaite: Rush Limbaugh explains why GOP didn’t want Cuccinelli to win. Reports Mediaite ” The morning after Democrat Terry McAuliffe defeated Republican Ken Cuccinelli  in Virginia’s gubernatorial election, grumbling for the right has begun to suggest that the GOP essentially abandoned the tea party candidate, especially in the crucial Washington, D.C. suburbs that helped decide the race. Not only does Rush Limbaugh believe the Republican Party left their candidate out to dry, but he also knows why they did it. ‘Do you realize what could have happened if the Republican establishment had supported Cuccinelli yesterday?” Limbaugh asked his radio audience. “The GOP apparently didn’t want to win Virginia because they didn’t want the tea party getting credit for it.” Read more here. 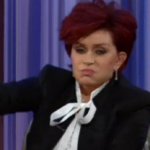 From Gossip Cop: Sharon Osborne slams “The View” during a taping of the ” Arsenio Hall Show”. Reports Gossip Cop ” Osbourne appeared on the show with her fellow “The Talk” anchors, and the group was asked about the differences between their daytime chat fest and “The View.”…The fiery Brit first praised Barbara Walters, and then quickly added, “The rest can go f**k themselves!” Read more here. 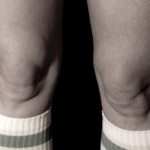 From Geekosystem: A new human body part has been discovered. A ligament that has gone unnoticed by doctors has finally been discovered. Reports Geekosystem ” Knees are weird. Once you get under the skin and into the inner workings there’s a lot going on. So much so that one ligament has gone unnoticed by doctors until two surgeons at University Hospitals Leuven identified it. Everyone, take a moment to learn about your Anterolateral Ligament or ALL. The ALL was actually hypothesized way back in 1879 by French surgeon Segond who described it as a “pearly, resistant, fibrous band. Doctors Steven Claes and Johan Bellemans from Leuven examined the ligament in 41 cadavers to prove that it exists. This previously unknown ligament could have implications for sports injuries.” Discover more about the ALL here. 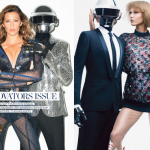 From Styleite: The WSJ’s new Daft Punk cover looks very familiar. It appears to be inspired by a Vogue cover that was published back in July. Reports  Styleite ” We haven’t been feeling very inspired by Vogue lately, but evidently we don’t speak for everyone. Particularly not for Wall Street Journal, who have been feeling very inspired by the fashion glossy. For WSJ‘s November 2013′s perhaps dubiously titled ‘innovators’ issue they’ve tapped Gisele Bündchen and Daft Punk for the cover. The model stands flanked by the French electro duo in what is basically a mirror pose of the one struck by Karlie Kloss and Daft Punk back in July, from the slimming leg pose to the shiny, sheer dress that just screams intergalactic music festival.” Read more here. 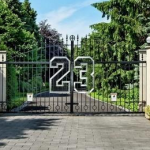 From SportsGrid: If you’re looking for a 56,000 sq ft estate, Michael Jordan has his Chicago mansion up for sale. Why did he make the move from Chicago to Florida? Reports SportsGrid “My kids are grown now and I don’t need a large house in Chicago…It was time for some warmer weather down at my new home in Florida,” Jordan told The Wall Street Journal.  The Highland Park mansion was built with nine bedrooms, 19 bathrooms, a tennis court, a putting green, and more than a few nooks that are obviously/exclusively for sex (see the 6:20 mark and you’ll catch my drift). The price tag? Whatever you’ve got (it’s being auctioned), which is down from $21 million, which is down from $29 million earlier this year. C’mon, Mike, just list it for $23 million and sell it to a Russian oligarch.” Take the virtual tour yourself and read more here. 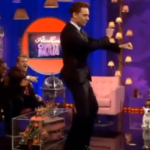 From The Mary Sue: Ever since the video of Tim Hiddleston dancing came out, multiple interviews have been asking him to strut his stuff again. Reports The Mary Sue “You can’t have too many videos of Tim Hiddleston dancing. It’s an actual fact. Thankfully since that video of him getting his groove on in Korea came out multiple interviewers have asked him to strut his stuff, and he’s complied, because he’s a champ like that. Presenter Alan Carr looks appropriately awed in the video above, and under the cut the Hiddles gets roped into a dance-off with none other than Zachary Levi.” See the video and read more here 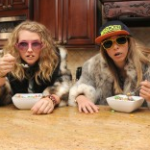 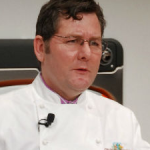 From The Braiser: The death of chef Charlie Trotter is still shocking but when he had an inoperable brain aneurysm he did report that he felt like he did not have a lot of time left. Reports The Braiser ”  Though the cause of Charlie Trotter’s shocking death yesterday has yet to be determined, the Chicago Tribune is reporting that Trotter, the famous chef who retired in 2012 after 25 years in the kitchen, had an inoperable brain aneurysm which may have contributed to his death. According to his friends and longtime coworkers, Trotter’s doctors diagnosed him with the condition, which weakens the walls of arteries and veins in the brain. They recommended that he should not fly, work at high altitudes, or exert himself too much, which would increase pressure on his brain.” Go here to read more.