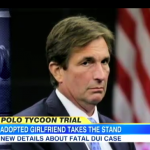 Dan returned to Good Morning America today to talk about the developments in John Goodman’s criminal case. The Floridian Polo Magnate faces DUI homicide charges, accused of a crash that killed a recent college graduate. Yesterday, a number of witnesses took the stands. What Dan noticed immediately is that, for the totality of the defense’s account, none of their testimonies will make things much easier/more believable. The defense is arguing that the crash was caused by his malfunctioning Bentley. Whether or not that is true, it is noteworthy that not a single witness (many of whom were at the scene of the crash, some soon after it occurred) recalled Goodman talking about his car in that way – you would think that if your car lurched forward out of your control and killed someone, you would have something to say about it. George Stefanopolous wonders whether Goodman will end up taking the stand himself, and Dan responded that “in most cases I’d tell you I don’t think the defendant’s going to take the stand.” This case is different. For a number of other reasons discussed, the defense here has work to do on making their account sound more realistic than it does currently. For Dan Abrams’ full discussion, click here.