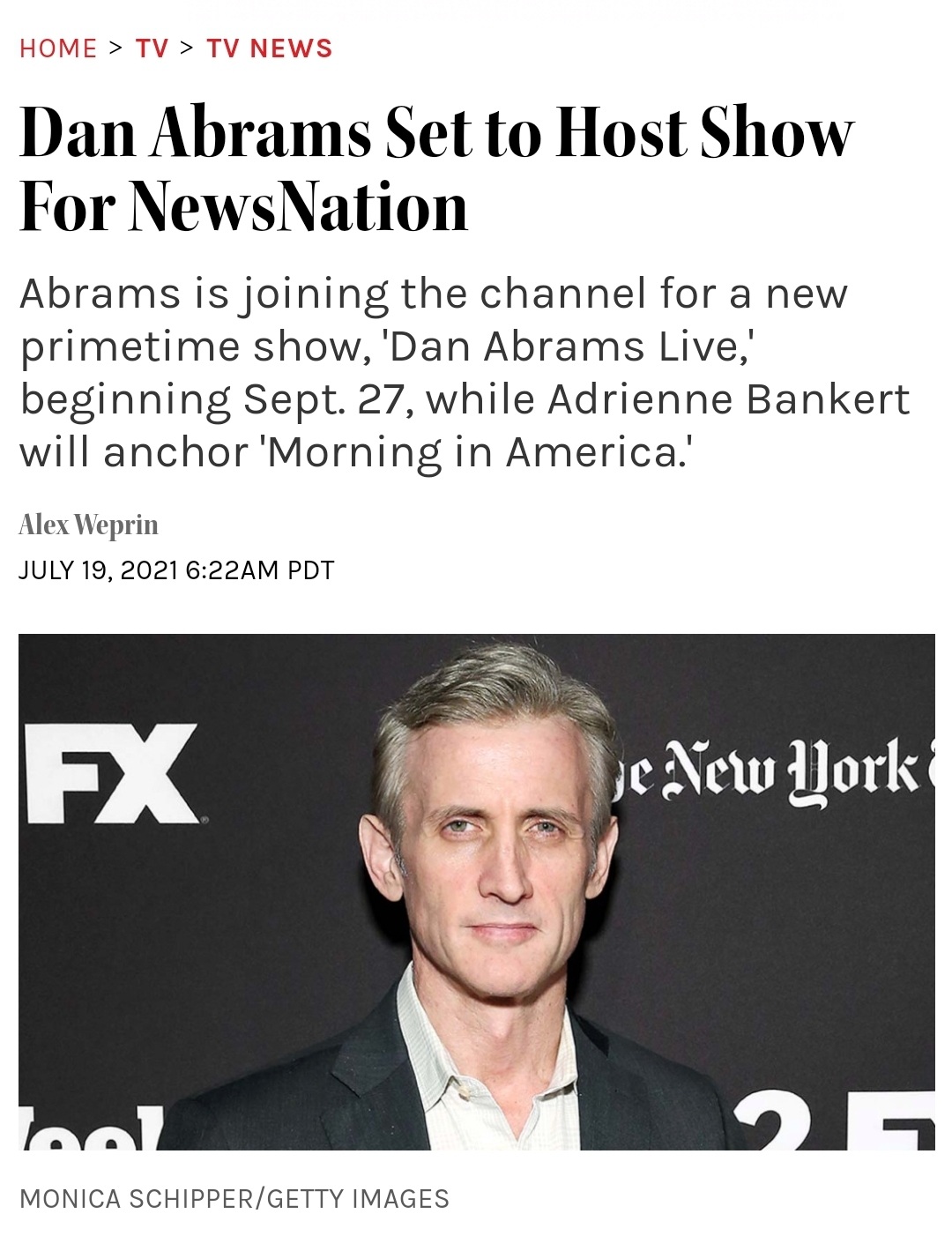 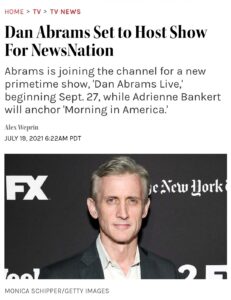 Announced on Monday by Nexstar Media, Inc., America’s largest TV station operator, and covered by outlets such as Deadline, ET, and Mediaite, Abrams will produce and host a nightly news analysis program, Dan Abrams Live, starting on September, 27th. The show, which will air every Monday through Friday at 8PM ET / 5PM PT, will focus on providing viewers with a highly opinionated, but fact-based analysis on some of the most important news stories of the day.

“Joining NewsNation is a welcome, natural fit for me,” Abrams said in a statement. “Too much of cable news is polluted by partisanship with shows focused on indoctrinating viewers, unabashedly cheering for one side or another.” According to Variety, the show’s “goal is not to score partisan points but to examine complicated issues, from foreign policy to domestic battles such as the current state and federal conflicts over voting rights legislation.”

“We are committed to presenting independent-minded analysis and opinion on politics, media, and the most important stories of the day,” Abrams said. “Exposing hypocrisy on all sides so viewers can make up their own minds. Always fact-based, sometimes surprising, but never agenda driven—you might call it a cable news show for the rest of us.”

Dan Abrams Live is a part of Nexstar’s push to turn NewsNation “into a full-time news service,” reports the LA Times. Originally launched in September, 2020 as a three-hour primetime nightly news block on WGN America, the channel was completely relaunched and rebranded as NewsNation in March, 2021, reaching 75 million U.S. households. The addition of Dan Abrams Live and a new three hour morning news program, Morning in America, to the NewsNation lineup will increase the network’s original programing from “19 hours at its launch in September 2020” to “55 hours of live news, analysis, and talk every week,” according to Business Wire.

In addition to his new gig at NewsNation, Abrams will continue to host his daily SiriusXM radio show, The Dan Abrams Show: Where Politics Meet the Law. He will also maintain his role as Chief Legal Analyst for ABC News, and continue to run his own media business, Abrams Media, which encompasses a variety of outlets including Mediaite.com, LawAndCrime.com, and LawandCrime Network.

In joining NewsNation, Abrams will be reunited “with NewsNation president, Michael Corn, who had been the senior executive producer of ABC’s Good Morning America until earlier this year,” according to The Hollywood Reporter. “Dan Abrams is the epitome of the pure, common sense approach to journalism envisioned when NewsNation launched last September,” Corn said in a statement. “He brings unparalleled expertise to our primetime line-up and emphasizes our ongoing commitment to help engaged viewers gain a better understanding of the day’s most controversial and complicated news stories. He has a fresh, no-holds-barred approach to covering and analyzing the news, and his credibility is unquestioned.”

Abrams, who has been publicly called “center-left” by some and “center-right” by others, hopes to bring a more nuanced view to some of today’s most talked about topics. “I want to have a civil conversation,” Abrams told Variety, hoping that his viewers leave the show “with more information and a firmer opinion about whether they’re with me or against me on a variety of issues.” The show will also feature guests, especially those who may disagree with Abrams. Speaking with Variety, Abrams said “we can show you don’t need to demonize people with whom you disagree,” however, he does not “believe that there’s any value to having two people yell at each other any more,” and vows to only have on one guest at a time.

Abrams also vows to “avoid both-sides-ism in presenting different viewpoints” reports Variety. “You can be pro-law enforcement and anti-racism,” Abrams said. “You can be pro-Israel and pro-Iran nuclear deal.” While Abrams hopes to avoid partisanship, he wants to make it clear that “this is not a headlines show.” Abrams won’t just be reading the news, he will be providing a fact-based, but opinionated analysis.

You can watch Dan Abrams Live when it premiere on September 27th, at 8PM ET / 5PM PT only on NewsNation.