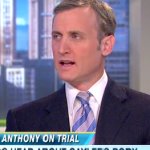 Dan Abrams returned to “Good Morning America” to discuss the media frenzy surrounding the Casey Anthony murder trial and the impact of different testimonies on both the prosecution and the defense.Though the prosecution had not presented an official cause of death,  a testimony by an entomologist last week stated that the bugs found around the claimed “garbage” in Casey’s car are actually bugs found commonly with the decomposition of a body, which could greatly hurt the defense. To view the full clip, click here.