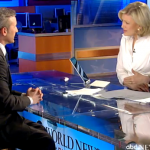 Dan Abrams appeared on World News with Diane Sawyer to discuss the bond hearing held last week for George Zimmerman, who took the stand himself and issued an apology to Trayvon Martin’s family. “In a bond hearing for a murder trial – I’ve never seen anything like it, and I don’t think it helped his case,” Dan began. “He must have insisted to his lawyer that he say this, and as a result he faced a tough cross-examination.” Sawyer noted her impression of the prosecution, who do not appear strong on one very crucial point in the case: who initiated the fight and what relevant evidence do they have for the allegation? When asked “do you have any evidence – the lead investigator says ‘no'”? Dan quoted. Based on all the witnesses and everything they’ve seen, the audio tapes that have been evaluated – the prosecution has come to the conclusion that Zimmerman was the aggressor, but clearly there is a lack of evidence to support that. “For him to say ‘we have no evidence’? It doesn’t neccessarily mean that they don’t have a case, though. There is evidence, and “remember,” Dan said, ” the defense will have to show [Zimmerman] was justified, so it’s an affirmative defense – they have the burden of proof. If Zimmerman used deadly force in an altercation where he was in fact the aggressor, and only shot Martin because he was losing the fight, that would be a huge complication. Watch Dan Abrams and Diane Sawyer in the full discussion here.