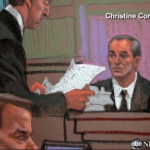 Dan Abrams appeared over the weekend on World News with Diane Sawyer to discuss the latest developments in the John Edwards Trial – specifically, new problems with the prosecutions key witness, Andrew Young. Edwards’ former aide, who was geared up to give the “star” testimony in the case against the former senator, has now admitted to several things that seriously undermine his own credibility. His testimony on Friday revealed a complicity in the misuse of funds – Young used some money to  take his family on vacation, and renovate his house. “The defense has now been able to poke so many holes in Young’s testimony. Now the prosecution is going to have to go back and fill those holes with other witnesses, who can back him up,” Dan said. For the full story, watch Dan Abrams and Bob Woodruff here.