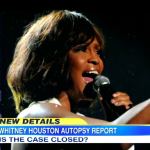 Dan Abrams appeared on Good Morning America last Friday to discuss Whitney Houston’s toxicology report, released last week. What many had been looking to to provide answers about the singer’s death, and a potential criminal investigation into it, doesn’t necessarily lead us in those directions. Dan doesn’t expect any charges here, but there are technically two possible avenues. One is the possibility of evidence tampering by a witness, say, if someone were to have provided her with the cocaine that showed up in the report, and then tried to cover traces of it in the hotel room. Another would be to follow that cocaine lead to try and find out where she got it from, which is an unlikely scenario at best. Watch Dan Abrams and the full discussion here.