22 May Dan Abrams on the Spray-Tan Trial 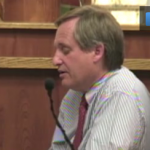 Dan appeared on Good Morning America today to discuss the “spray-tan trial,” or the murder trial of Adam Kaufman, accused of killing his wife Lina. This case came to national attention when Kaufman’s defense suggested Lina’s death was cause by an allergic reaction to her first ever spray-tan. Dan talked about the 18-month period taken by the medical examiner for a cause-of-death ruling, who missed a scar, calling it a “good place for the defense to start.” Though the examiner argued that the lengthy review was due to both a backlog and the complicated nature of the case, Dan says this gives rise to questions. Dan also addresses the new possible motive of an affair presented by the prosecution, which, although Lina’s family supports him, “could still be powerful with a jury.”  Watch the full video here.