15 May Dan Abrams on the “Spray Tan Defense” 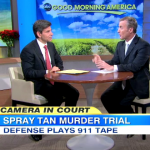 Dan Abrams appeared on Good Morning America to discuss what’s been headlined in recent weeks as the “spray tan murder” trial. Apparently that name is becoming less relevant, if at all. The Defense is moving away from that argument – that Adam Kaufman didn’t murder his wife, but that she had fatal reaction to a spray tan – “And smartly so,” Dan said. “Remember that it’s not their burden to demonstrate what happened.” They’re now going with something else: a preexisting heart condition, and “maybe that’s in part based on the testimony they’re going to get from her own family.” Her mother may testify on behalf of the accused here, and that does mean something. A lot, according to Dan, though when you make an argument like that it must obviously stay very consistent with the medical reports. The medical examiner on this case took eighteen months to release his first one. “It’s a tough case – you don’t  want to rely entirely on the medical examiner, with no overt motive and then the mother of the victim testifying for the defendant.” Watch Dan Abrams and the full discussion here.