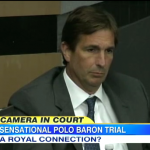 Dan Abrams went on Good Morning America today to talk about the continuing Polo Magnate DUI manslaughter trial. Today they focused on whether or not the defendant will end up taking the stand. A big issue: Goodman blew a breathalizer test, hours after the accident. Part of the defense is resting on the idea that Goodman was drinking alone, and that at the time of the crash, he was not intoxicated. The second part of the defense relies on the supposedly malfunctioning Bentley he was driving. To demonstrate that key element to the defense – the first, that he was drinking alone, after the accident – he will need to testify. The scheduling in this case makes it seem like that’s not going to happen, said Dan, but that remains to be seen. Watch Dan Abrams’ full discussion here.