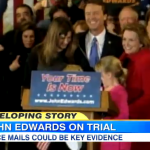 Dan Abrams appeared on Good Morning America to talk briefly with Bob Woodruff on developments in the trial against John Edwards, who’s been charged with multiple counts including conspiracy, fraud, and the (mis)use of illegal campaign contributions. There are complications to the case – the defense says that the cover up of the affair (which Edwards admits to) was not a part of his political agenda, but for separate, personal reasons. He does not mention the campaign as having anything to do with the charges made against him. “And that’s what’s so important here – the prosecutors have to show this was about the campaign,” Dan said, potentially as a means to influence the election. “They have to show that the reason that this money was solicited and used wasn’t to protect him from his wife, but was to try to win that nomination.” Watch Dan Abrams and the full discussion here.