16 May Dan Abrams on the John Edwards Trial 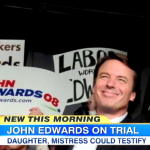 Dan appeared on Good Morning America to go over who may be the final witnesses in the defense’s case for John Edwards, whose trial has (for many) solidified his already-suffering reputation. George Stefanopolous opens with the question of Cate Edwards, John’s daughter – “clearly the most sympathetic witness to be put on the stands.” Is that reason enough to put her there? “No,” Dan said, “meaning she wouldn’t be a allowed to testify just as a character witness. No question she’s going to discuss how much her father probably didn’t want her mother to know about the affair – that’s what all these witnesses, these last witnesses, might testify to: this notion that John Edward’s number one concern was making sure his wife didn’t find out about the affair.” As to Rielle Hunter taking the stand? “I don’t know that she will be; she’s risky.” The reason to call her would be to talk about all her conversations with John Edwards about the desire to keep this from Elizabeth. As to Edwards himself being called to testify? “They will not call him to the stand…I could be wrong, but I won’t be.” Watch Dan Abrams and the full discussion here.