08 May Dan Abrams on the John Edwards Trial 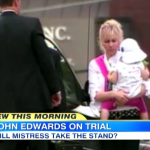 Dan Abrams appeared on Good Morning America today to continue his coverage of the John Edwards trial – a trial that, apparently, the former Presidential candidate is feeling more optimistic about than ever. Dan explained why – Monday’s testimony given by a lawyer of Bunny Mellon, one of two key donors involved in the charges made against Edwards regarding misuse of campaign donations. “Bunny Mellon’s lawyer testified and gave the exact sort of testimony that John Edwards wants, and that is that this was a personal contribution and not a campaign contribution. Those are exactly the words he wants to hear.” There are a couple problems with being over-confident that this testimony really amounts to anything for the defense, though. First of all, this lawyer might not have known what the money was being used for. Second of all, Dan continued, “the legal question isn’t what was Bunny Mellon thinking the money was for, the question is what did John Edwards think the money was for, and [what did he] ultimately use it for.” We’ve heard again and again what Rielle Hunter was told by Edwards about the money and the cover-up, so regarding her potential testimony, Dan finished, Hunter could be helpful to the defense but is “one heck of a wild card.” Watch Dan Abrams and the full discussion here.