07 May Dan Abrams on the John Edwards Trial 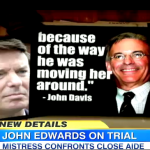 Two weeks in, Dan Abrams continued his coverage of the John Edwards trial last Friday with more analysis of the testimonies given by the many campaign workers brought in. John Davis is one of two key donors in questin here, and George Stephanopolous regards his testimony as one that brought us right “into the heart of the Edwards campaign.” It’s true – witness after witness are being called into say that the use of the money to cover up Edwards’ affair was essentially “part of the campaign,” Dan added. He reiterates what he has been calling the most crucial question of this case: was the money designed for a campaign cover up (which would make it illegal), or a personal cover up (which wouldn’t be illegal). “So the prosecutors are calling in all these campaign workers to say ‘yeah, we knew about this’,” Dan said. The second of witness of interest that day was the go-between for Edwards’ other key donor, Bunny Mellon, a man Stephanopolous speculated to be very damaging to the defense. Dan agreed that he was definitely helpful to the prosecution, having said essentially “we believed this money was solely for the campaign.” Still, the main question is with regard to what Edwards was thinking, and whether or not he regarded it as a personal cover up – something he could argue is totally legal – as opposed to a campaign-related one. Watch Dan Abrams and the full discussion here.