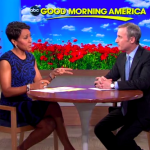 Dan went on Good Morning America today to discuss the authorities in Tennessee and the foiled escape plot by the state’s only female death row inmate. Two men, including one former prison guard, have also been arrested in connection with the plan.Pike, 36, was sentenced to death in March of 1996 for murdering 19-year-old Colleen Slemmer in Knoxville, in 1995. She is also serving time for attempting to murder a fellow inmate in 2004, according to the Tennessee Bureau of Investigation. Acknowledging that this will likely have little to do in the way of changing her sentence  – pike has “exhausted all appeals” and is on death row – there are very serious charges being made against her co-conspirators. Watch Dan Abrams and the full discussion here.