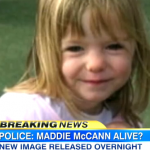 Dan Abrams appeared yesterday on Good Morning America to discuss what’s become a target of international attention. Next week, British Maddie McCann will have been missing for five years. She vanished while on vacation with her parents in Portugal at age 4, and Scotland Yard is now reinvestigating this case that the Portuguese authorities have failed to close. The British Government, having become involved at the insistence of McCann’s parents, think it’s possible Maddie may still be alive. There are over 40,000 pieces of information, confirmed by ABC, and Dan went live from Los Angeles yesterday to discuss the re-opening of this case. Why? “I think they’re trying to do two things here. Number one, put this case back in the public eye, to see if they can get any more leads. New leads are going to be what’s important. Number two, they’re putting enormous pressure on Portuguese authorities to re-open the investigation, meaning: (the British) need their help. But I think that they also want to make sure people are thinking about this.” Making it an international topic of interest might very well help the investigation. For Dan Abrams and the full discussion, watch here.