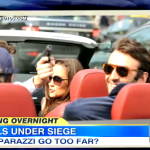 Dan Abrams appeared on Good Morning America today to talk about the somewhat shocking photos of Pippa Middleton, released over the weekend. Kate Middleton’s sister, known to be something of a “party girl,” is seen in a car with three other men in Paris. It appears that when followed by the paparazzi, the man in the driver’s seat, next to Pippa, wielded a gun and pointed it at the photographer. Whether or not the gun was real is unknown at this point, which is obviously a key question if charges are to be made. “If it was real,” Dan added,” “the charges against the person holding the gun are much more significant – we’re talking about up to either five or seven years in prison; a fake gun, up to two years.” When it comes to Pippa, though, Dan says it’s unlikely she’ll be charged. “If, however, somehow evidence comes to bear that she was involved in the decision to do this, that’d be very different. In high profile trials, no matter where you are, prosecutors want to cover all of their bases and they want to make it clear to the public that they are thoroughly investigating the case.”  Watch Dan Abrams and the full discussion here.