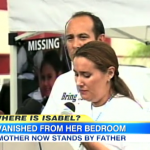 Dan appeared on Good Morning America today to discuss the disappearance of Isabel Celis, a six-year old girl who was found missing from her bedroom one night last month. As evidence unfolds and the search continues, her father has been banned by Child Protective Services from seeing his other two children, leaving questions as to his role in the case. Following this move, Isabel’s mother has stepped up to defend him. Is the mother right in taking his side, or is it an emotional response? Does Child Protective Services know something we don’t?  “The fact that Child Protective Services is stepping in here means there’s something that they found that suggests he’s not a good father,” argued Abrams. “Ok, what that is, we don’t know. Is it connected to the case? We don’t know. But it’s a big deal for Child Protective Services to step in and say, you literally cannot be anywhere near your children.”  This move by Child Protective Services surfaces following a less-than-usual 911 call by the father, where he laughs as he reports Isabel’s disappearance. Dan says, though, that a suspicion based on tone of voice will not be upheld within a court of law: To suggest because someone calls 911 in a way most of us wouldn’t and to then talk about experts and voice experts,” he continued, “it just doesn’t mean anything to me.” The father’s guilt is yet to be determined in a continually unfolding case. Watch Dan Abrams and Nancy Grace’s full discussion here.