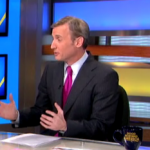 Dan has been covering Lindsay Lohan’s legal troubles almost as long as she’s been committing crimes! Much of Lindsay’s legal troubles began with a series of arrests from several years ago, but she hasn’t yet been able to put any of the charges behind her. With renewed attention on Lindsay following a hearing called to deal with her failure to properly serve her court-ordered community service hours, Dan was on hand at “Good Morning America” to answer the question “Just how serious are Lindsay Lohan’s legal problems?” You can see his answer here.