31 May Dan Abrams on John Edwards 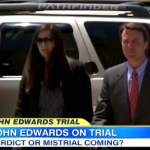 Dan appeared on Good Morning America today to discuss the latest developments in the trial of John Edwards. The jury has now been deliberating for eight days, and some have been speculating that they are deadlocked. Now, the alternate jurors have been sent home. What does this mean? A verdict? A mistrial? “This is a really unusual move,” says Dan of the alternate jury. They have been told to come to court every day, though they cannot deliberate and must sit by themselves. They made news with their matching colored shirts, and Dan says it “seems they were having a bit of fun.” Now, they’ve been told by the judge they can go home. “The judge is not saying the case is over,” explains Dan, but she is saying those jurors are not needed every day. “Why? What is it that happened?” asks Dan. It could mean there is a verdict, but it could also mean that the judge is realizing that this is going to be a long trial and it is not fair to ask them to stay. Dan does not, however, think that this move indicates a hung jury. Both the judge and Dan do feel the jury is healthy, though, and we continue to await a verdict. See the full video here.