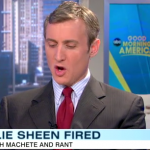 Charlie Sheen’s recent canning from CBS is the source of much controversy, and Abrams appeared on “Good Morning America” to discuss the ways in which the star’s bizarre behavior contributed to the termination of his “Two And A Half Men” contract. To watch the clip, click here.