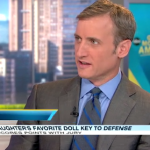 Dan Abrams returned to “Good Morning America” to discuss the defense’s focus on the evidence that was not found in the Casey Anthony murder trial. Though the defense has focused their argument on several issues, there is conflict in their approach of urging the prosecution to prove it was a murder rather than an accident. It ignores their opening statement, in which George Anthony’s participation became a key to their defense. To view the full clip, click here.