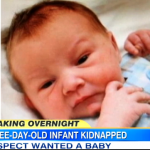 Dan was on Good Morning America yesterday to talk about a shooting that occurred this week in suburban Houston, outside a pediatric center. 28 year old Kala Golden was shot with seven rounds, and her three day-old son was abducted by three people, witnesses have said. “They should all stew in the same pot,” was the first thing Nancy Grace had to say about whether or not all three would be charged with capital murder. Dan explained that “even if they didn’t know that there was going to be a shooting, that they thought this was going to be a kidnapping, they’re still likely to face capital murder meaning: they knew they were involved in something illegal.” The charges “could and likely would” come out this way. Watch Dan Abrams and Nancy Grace’s discussion here.