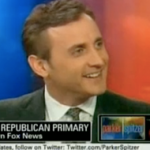 On Mediaite: Dan Abrams appeared on “Parker/Spitzer” today to discuss the curious fact that 5 potential Republican nominees for president in 2012 are currently staples on FOX News. Abrams disagreed with concerns that this gave them an unfair platform to campaign, arguing that being a FOX News commentator is an overrated privilege, and that famous people running for president is not a new phenomenon. To watch the clip, click here.